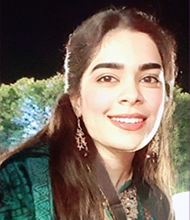 Ana Tawfiq Husain recently finished her Master’s in International Relations with a concentration in Middle East politics at King’s College London. Her dissertation explores how foreign interventions in Lebanon since 1989 (after the end of the 1975 Lebanese Civil War) have impacted sectarian politics. Specifically investigating the roles of Saudi Arabia, the United States, Israel, Syria and Iran in the post-civil war reconstruction of Lebanon, her research adopts a Gramscian approach to trace the cultivation of an ‘inverted’ and externally induced sectarian hegemony by adapting Antonio Gramsci’s concept of a ‘passive revolution.’

Prior to her graduate studies, Ana attained her Bachelor’s in Social Development and Policy with a Minor in History, where her senior research project ‘In Defence of Asian Values’: Investigating Lee Kuan Yew’s Postcolonial ‘Garrison Mentality’ for the ‘Singapore Story’ was awarded the ‘Best Undergraduate Research Award in the Social Development and Policy Program.’ An edited version of this research was subsequently published in the Strife academic journal of the War Studies Department at King’s College London.

In addition, Ana’s work titled ‘Contentious Oil Politics and the Rentier State Theory’ which examined the hand of colonialism in the development of the political economy of oil was published in the Pakistan Horizon scholarly journal in 2019. Her research paper ‘“Tis one thing to be tempted… another thing to fall.” – A Critical Analysis of William Shakespeare’s Measure for Measure’ was also published in the Tezhib journal of Habib University in 2019. Ana has also worked as a Research Assistant for The Pakistan Institute of International Affairs (PIIA) and is an independent political contributor for the official blog of PIIA, Pakistan Horizon. Moreover, she is a member of the Great Transition Initiative (GTI) where she has contributed towards intellectual dialogues on prospects and visions for global solidarity.

As an alumnus, Ana is excited to combine her own insights as a student at Habib University with a dialogical teaching philosophy for her classes vis-à-vis the understanding of knowledge as emancipatory and transformative, rather than merely depository. Such an undertaking seeks to nurture an intellectual partnership with her students so that they may become critical co-investigators.