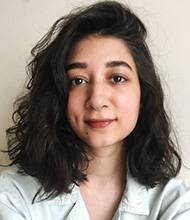 Isma Gul Hasan is an illustrator, visual artist and designer. She received her Bachelor’s degree in Visual Communication Design from Beaconhouse National University in 2017, and completed an M.A in Illustration from Camberwell College of Arts, University of the Arts London in 2020. Her personal practice and research interests span the realms of speculative fiction, visual storytelling and design for social change, with particular emphasis on themes like time, memory, hope and autonomy from a feminist lens.

Hasan has worked as an illustrator and animator at Shehri Pakistan, an initiative aiming to provide accessible civic education through audio-visual content and was the creative director for the first ever dystopian, traditionally animated Pakistani short film, Shehr-e-Tabassum, which was screened both locally and internationally, and received critical acclaim.