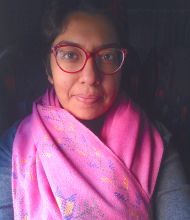 Haya Fatima Iqbal is an Academy and two-time Emmy winning documentary filmmaker based in Pakistan.

Through her documentary work, she has covered a range of issues connected with social justice ranging from gender and militancy to climate change and water scarcity. Her work has been featured on HBO Documentary, BBC, Al Jazeera, Channel 4 UK, VICE, National Geographic Society, Redfish, CNN and the Thomson Reuters Foundation among other media organizations.

Haya’s storytelling of a 19-year-old honor-killing survivor in the film A Girl in the River: The Price of Forgiveness resulted in Pakistan’s parliament passing a law tightening punishment against perpetrators. The film won an Oscar for Best Documentary Short in 2016, and the Emmy Award for Best Documentary in 2017. In 2019, Haya’s co-produced feature-length documentary Armed With Faith won the Emmy Award for Outstanding Politics & Government Film. The film follows the lives of three men who work to defuse bombs with the police department in the province of Khyber Pakhtunkhwa, Pakistan.

Her work with Humans of New York photo blogger Brandon Stanton resulted in never-heard-before stories from Pakistan reaching the world, including the story of a woman named Syeda Ghulam Fatima who is working to end bonded labor in the country. Her photographs and her story resulted in a phenomenally successful fundraiser to expand her work, through which the team ended up raising over 2 million dollars within two weeks.

Haya is also the Co Founder of the Documentary Association of Pakistan (DAP), an initiative to promote the art of documentary films in Pakistan. DAP also works closely with documentary filmmakers to provide them with networking and training opportunities by organizing filmmaker meet-ups and training workshops.

She is a Fulbright alumna and an Acumen fellow.