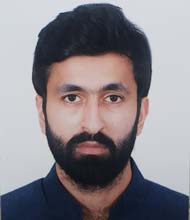 Daniyal Ahmed is a musician, anthropologist, curator, and producer; researching and practicing at the intersection of sound and culture. He completed his M.A from the South Asia Institute at the University of Heidelberg, Germany, where he studied Anthropology and History.

Having arrived in Germany in 2015, in the heart of the so called ‘Refugee Crisis’, he started playing music, and eventually doing ethnographic fieldwork, with various migrant communities there. His M.A dissertation, centered around an Asylum-house in Heidelberg, studied migrant life in Germany through the lens of sound and music. He is interested in sound, both musical and non-musical, listening cultures, sonic practices, histories of music and sound reproduction, oral histories, and musical exchange and development through migration. He employs sonic ethnography and musical practice as research methods.

Although he began his musical journey as a self taught singer and guitar player, in 2013, he became a disciple of  Ustad Salamat Hussain and started learning the Bansuri and Shastriya Sangeet (South Asian ‘Classical’ Music). Over the years, having failed to master any one instrument, Ahmed has succumbed to playing a number of string instruments and flutes, whilst trying to maintain his focus on the Bansuri. He has performed in various formations in both Pakistan and Germany. His own music project, ‘Taranum’, is an exploration of affinities between South Asian and North African sounds, and their contemporary in-betweens.

Aside from his teaching and music practice, he is also involved in various cultural productions as a producer/curator and is the co-founder of Karachi Community Radio (KCR), “an audio-visual intervention in the city’s musical culture”. Through KCR, he regularly produces collaborative and experimental musical performances and discussions which are live-streamed online and are publicly accessible. Ahmed has also been working closely with the All Pakistan Music Conference (Karachi), and is now serving as a member of its Executive Committee.

Ahmed has been involved with Habib University since 2014, when he worked as a writing tutor, before returning as a Lecturer in Comparative Liberal Studies in 2019. He has also developed and taught an experimental, humanities course, for secondary school students at the British Overseas School in Karachi.