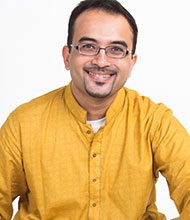 Mr. Kerai holds a Bachelor of Arts in Mathematics and a Master of Arts in Teaching (MAT) in Mathematics from Bennington College, VT, USA. He has taught mathematics in both public and private schools in USA, and has been teaching and conducting teacher training in Pakistan. With his undergraduate research being in the history of mathematics, Mr. Kerai has paid special attention to teaching mathematics with historical context, enriching the learning experience for students at the high school and University levels. He has given talks at many mathematics conferences on topics in the history of mathematics, with a special focus in the mathematics during the medieval Islamic period.

Simultaneously, Mr. Kerai harbors and pursues a second interest, music. He is a celebrated tabla player and leads an ensemble of classically trained musicians by the name of Tarz Group. He has held several performances in Pakistan and has released an album of purely instrumental music called The Essence of South Asia, which features musical maestros of Pakistan. Mr. Kerai is committed to helping young listeners engage with their South Asian musical heritage by conducting workshops on music theory and through innovative performances via Tarz Group.

​At Habib, Yousuf has been instrumental in garnering student interest towards learning musical skills and has led, along with renowned musical maestros, a student orchestra of over 30 students. He is currently the Founding Director of the Centre for South Asian Music at Habib, which is dedicated to the promotion and proliferation of South Asian music.