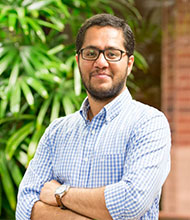 Dr. Usman has received his B.Sc. and M.Sc. from the University of Engineering and Technology (UET), Lahore, Pakistan in 2008 and 2011, respectively. He has received his M.Sc. in Electrical Engineering (majors in Optics and Microsystems), M.Sc. in Mechanical Engineering (majors in MEMS, Packaging, and Nanotechnology), and Ph.D. in Electrical and Computer Engineering in 2014, 2016, and 2018 from the Georgia Institute of Technology, respectively. He is a recipient of the prestigious US Fulbright scholarship and was also awarded HRDI-UESTPs/UETs scholarship award from the Higher Education Commission (HEC) of Pakistan. He also holds the certification of Microelectromechanical Systems (MEMS) from the Georgia Institute of Technology.

Dr. Usman’s doctoral research was focused on the investigation and demonstration of compact lab-on-a-chip (LOC) optical sensors for the post translational modification (PTM) profiling of the proteins used as biomarkers, for early cancer detection. This multi-disciplinary research has been focused towards the integration of functional proteomics, microfluidics, and nanofabrication, employing the principles of theoretical modeling and simulations, microfluidics, surface chemistry, and nano-optics for the realization of a novel integrated LOC platform for pre-concentration, filtration, and label-free detection of proteins and biomarkers. The motivation of this research was extracted from the inability of conventional affinity-based pre-concentration and separation techniques for elucidating PTMs of the proteins, and the unavailability of LOC sensors for this task for the point-of-care (POC) healthcare applications.

Dr. Usman also worked as an instructor of record at the Georgia Institute of Technology from 2017 to 2018 where he taught the undergraduate course of Fundamentals of Digital Design in the Electrical and Computer Engineering Department. He has also worked and done research in the domain of Renewable Energy, Smart Grids, Power Electronics, and Wireless Power Transfer. Besides his Ph.D. research, he has served as a senator in the Georgia Institute of Technology’s Student Government Association (SGA) and as the vice-president of Pakistan Student Association (PSA) in 2014. He is also an amateur photographer and a cooking enthusiast.