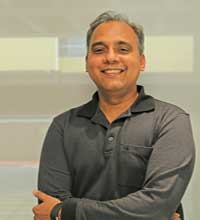 Dr. Hasan served in the engineering branch of Pakistan Air Force (PAF) as an Aeronautical Engineer (specialization in Avionics). He graduated with a bachelor’s degree from College of Aeronautical Engineering (CAE) at PAF Academy Risalpur in May’ 91 and an M.S. in Electrical and Computer Engineering from University of Southern California in Aug’ 02. His Ph.D. is in wireless communications from University of Texas at Austin under Professor Jeffrey G. Andrews. He has also completed Master’s in War studies and Strategic studies from PAF Air War College, Karachi.

After a brief tenure as a lecturer at UT Austin, Dr. Hasan has been teaching graduate courses at Air University as a visiting faculty. His exposure to academia and industry allows students to undertake fundamental research and explore issues that are also important to Pakistan’s industry. He was awarded with Tamgha-i-Imtiaz (Military) for the design and implementation of PAF Next Generation Networks. Dr. Hasan played a key role in the establishment of an Aviation Design Institute (AvDI) at Pakistan Aeronautical Complex (PAC), Kamra for design and development of future aerial platforms.

Dr. Hasan’s research is mainly focused on interference suppression techniques in wireless ad-hoc networks. His interest is in analyzing the impact of physical layer design, especially spread spectrum, on capacity of ad-hoc networks as well as its effect on MAC design. He has been using stochastic geometry tools to show that spread spectrum physical layer has a number of advantages over narrowband systems in wireless communication networks.

Dr. Hasan remained associated with Habib University since the initial design phase of EE curriculum before finally joining University on 01 Jan’ 18 as an Associate Professor and Program Director (EE).