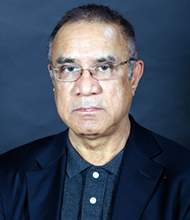 Dr. Syed Nomanul Haq began his university education as a student of applied sciences at the University of Hull in England, specializing in Electronics. As a fresh engineer he worked for the famous Dutch company Philips, but this phase of his professional life lasted for a brief period of merely one year. Finding his niche in the humanities, particularly in intellectual history, philosophy, and cultural studies, he embarked on a Master’s program in the field of the history and philosophy of science at University College London (UCL). During his graduate work in London, he enrolled also at the School of Oriental and African Studies to take preparatory courses in classical Arabic and Persian, acquiring at the same time elementary French and German.

While studying at UCL, and for some years after earning his Master’s degree in 1979-80, Dr. Haq worked as a young broadcaster-journalist for the Urdu Service of the BBC, producing various programs on current affairs and culture, and also reading the news after translating official bulletins from English into Urdu. During this time he also produced with the famous violinist Yehudi Menuhin a five-part BBC series on classical Indian-Western music.

But Dr. Haq’s scholarly career began in earnest when as a UCL Ph.D. student he was selected to study as a transfer student at Harvard University; at Harvard, he was trained for many years at two departments—Department of the History of Science and of Near Eastern Languages and Civilizations. His doctoral work was carried out almost entirely at these departments, being supervised by scholars of the stature of the logician W. V. O. Quine, Arabic philologist Wolfhart Heinrichs, and historian A. I. Sabra. Also, he served in the research teams of the biologist E. O. Wilson and Nobel Laureate Sheldon Glashow.

After earning his UCL doctorate in the wider field of Graeco-Arabic intellectual and cultural history, Dr. Haq was appointed as Research Fellow at Harvard’s Center for Middle Eastern Studies and taught both at Harvard and at Tufts University. Then, in 1990, he won a grant from the American Philosophy of Science Association to work on his first book, Names, Natures, and Things. This book which is a critical study of an Arabic alchemical text—was published in 1994 by Kluwer of the Netherlands in the classic Boston Studies in the Philosophy and History of Science series. Among other scholars, this book was reviewed also by Seyyed Hossein Nasr in the prestigious journal Isis, and has a preface written by David Pingree of Brown University.
Later in 1994 Dr. Haq was appointed at Brown, another Ivy League University, at the standing rank of Assistant Professor—his first US faculty appointment. He continued his research and teaching for several years at Brown, evaluated by his students to be the best teacher in the entire Faculty of Arts and Sciences. In 1996, he accepted an assistant professorship at Rutgers University and then moved to the University of Pennsylvania as a standing faculty member in the Department of the History of Art. In 2004, he received an award from the American Institute of Pakistan Studies to serve as Project Director of a private library survey project that he had himself proposed. The data of this Pakistan-wide survey are available on the Digital Library for International Research of the Council of American Overseas Research Centers.

In 2006, Dr. Haq joined the School of Humanities and Social Sciences of LUMS. As a senior professor there, he played a fundamental role in developing this school which during his almost decade-long service grew from a small service unit into a major feature of the academic landscape of LUMS. In early 2013, Dr. Haq was appointed Professor of the Social Sciences and Liberal Arts and Advisor at IBA Karachi.

The list of Dr. Haq’s academic work and his publications is very large. Some 41 book chapters, 73 journal papers and general articles, and 13 singly-authored or edited books. His writings have been published by Harvard University Press, I. B. Tauris, Springer, Oxford University Press in Oxford, Cambridge University Press, and the like. As for his papers, they have been carried by several international learned periodicals including ISI-indexed journals such as Daedalus, Nature, and Isis.

Dr. Haq has written numerous articles for the general public, including op-ed articles for the New York Times, and the former International Herald Tribune, and for several years he has been writing commissioned articles on global literature and culture in Dawn. He was Chief Editor of the LUMS Urdu periodical Bunyad, and sits on the editorial boards of many international journals—among these are the Journal of South Asian Intellectual History of Netherland’s Brill and the Critical Muslim of London’s Hurst Publications. He serves as General Editor of the series Studies in Islamic Philosophy of Oxford University Press, one volume of which received the coveted Custodians of the Two Holy Mosques Award.

Notable among many grants and awards Dr. Haq has received is the Henry Luce Foundation collective award, a three-year award which concluded with three volumes of studies published by State University of New York Press. The record of Dr. Haq’s keynote and plenary addresses at international forums is also extensive—a record that includes forums such as the Institute for Advanced Study, Princeton; Berkeley Graduate Theological Union; and United Nations University, Barcelona.