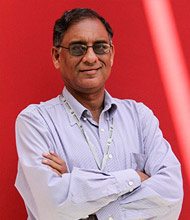 Dr. Asif Farrukhi is a fiction-writer, critic and translator. A public health physician by training, he did his MBBS from the Dow Medical College, Karachi in 1984 and Masters in Public Health with concentration in International Health from the Harvard University, USA in 1988. He completed the Short Course on Health Economics and Financing from the London School of Hygiene and Tropical Medicine in 2012. He served as Senior Instructor in Community Health Sciences at the Aga Khan University, Karachi with primary responsibilities of teaching undergraduate medical and nursing students and developing modules of primary health care in under-served areas of Pakistan. From 1994 to 2014, he served as the Health and Nutrition programme Officer at UNICEF, Karachi with primary responsibility of planning, monitoring and managing Maternal and Child health related interventions in collaboration with the government and NGOs.

Dr. Farrukhi’s academic and research interests are in literature and language. Known for his short stories and essays, seven collections of his short fiction and two collections of critical essays have been published. He has published translations of prose and poetry from modern and classical writers. His recent publications include a collection of new critical essays on Manto and Look At The City From Here, an anthology of writings about Karachi, published by OUP. Dr. Farrukhi contributes regularly to the English- language press. Two of his adaptations have been staged in Karachi. He is the editor of Duniyazad, a literary journal of new writing and contemporary issues in Urdu.

Dr. Farrukhi has presented papers and participated in literary events at home as well as abroad. He is a founder member of the Karachi Literary Festival. For his distinguished work, he was awarded the Prime Minister’s Literary Award by the Pakistan Academy of Letters in 1997 and the Tamgha-i-Imtiaz by the Government of Pakistan.