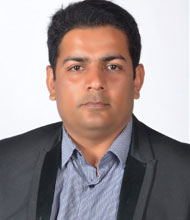 Dr. Ahmad earned his Ph.D. from Politecnico di Torino, Italy in the subject of electronics and telecommunications. He worked at Image Processing Lab in collaboration with STMicroelectronics Milano during his masters and Ph.D. studies. He contributed to European FP7 project Real and Virtual Come Together in a Virtual Reality (REVERIE). It is a general-purpose tele-immersion system that enables individuals to interact in a shared 3D synthesized environment. The system reconstructs a virtual character of participating user by forming a mesh, which is further encoded to be transmitted over a network.

Dr. Ahmad joined Iqra University, Islamabad in 2014, right after his Ph.D., where he worked as an Assistant Professor till March 2018. He has been teaching various courses of core computer science at graduate, post graduate and doctoral levels. He has supervised many postgraduate theses in the fields of computational theory, networks, wireless communication and cryptography.

He joined Habib University's School of Science and Engineering, in March 2018. He admires the philosophy of HU that teaching liberal core to science students can produce better elements of society. He believes that the challenges faced by Pakistan today are of socio-technical nature, and acquiring only the cutting edge technology is insufficient to address them.