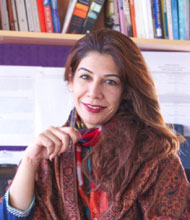 Dr. Sabyn Javeri is an Assistant Professor at the Arzu Program for Languages and Literature at Habib University. She has a Masters from Oxford University and a doctorate from the University of Leicester. She is an award-winning short story writer and the author of best-selling novel ‘Nobody Killed Her’. Her texts on creative writing have also been widely published. Dr. Javeri is interested in rediscovering our creative heritage and literary past. Her research is currently exploring the works of forgotten literary heroes of the subcontinent and developing a discourse related to cultural identity through creative writing.