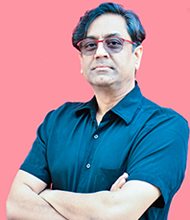 Professor Muqeem Khan holds a B.S. in Interior Design and an M.A. in Industrial Design from the Ohio State University. His motion picture credits with Walt Disney and Square USA include Deep Rising, George of the Jungle, Flubber, Armageddon and Final Fantasy.

Professor Khan believes that a creative individual should be searching, isolating, managing and manipulating the methodologies of multiple knowledges. Through ‘empathic design’ and associated techniques, he is currently researching Digital Intangible Heritage (DIH). He is focusing on the continuity of cultural knowledge by proposing a new model for access to indigenous methodologies, particularly non-codified or traditional knowledge. Specifically, he is investigating, documenting and transmitting the Unani medicinal practices in Pakistan.

Besides teaching design classes at Virginia Commonwealth University and Northwestern University in Qatar, Khan has been predominantly been teaching 2D/3D animation classes for over 12 years in the Arabian Gulf region.

See his mixed reality experimentations and presentation, “Playful Technology to Keep Cultural Heritage Alive,” at the TED@Doha Summit on Vimeo.