You are at:Home»Convocation»A Stepping-Stone for the Co-Founders

In August 2014, Habib University opened its doors to its first batch of students. A very new institution, the university had not yet fully completed its construction. Even so, 109 students chose to enroll, earning themselves the name the Co-Founders.

In four short years, these students went above and beyond what was expected of them. 84 students graduated, 32 with degrees in Science and Engineering, and 52 with degrees in Arts, Humanities, and Social Sciences.

Neha Panjwani, who won the best thesis award upon graduating, spoke of her first impression of Habib University, “I remember the first time I walked into campus only to find a small building where the orientation was to be held. I was later given a construction helmet to wear for my tour with the president and although everything around me in that moment prompted a general sense of uncertainty and risk, I remember feeling assured, calm and the most confident I had ever been in my entire life. I was nothing but keen and inquisitive to start my four years here.”

In her valedictory speech, Saadia Asad Pathan said, “we call ourselves Pakistan’s first Liberal Arts University but we’re not just the first. We’re also new and being new is far scarier than being the first. But I believe that it’s only the adventure of being new that has given us all, students, faculty and staff, the freedom to be individuals. To push boundaries, to experiment beyond the traditions and expectations that define institutions much older than us—both here and abroad.”

The Co-Founders hold the university, its faculty and staff close to their hearts and Habib University too honored its first graduating batch of students by engraving their names on the steps of the Amphitheater, which is located at the heart of the institution and is a space students have spent much of their time performing theater productions, musical nights and a host of other functions. 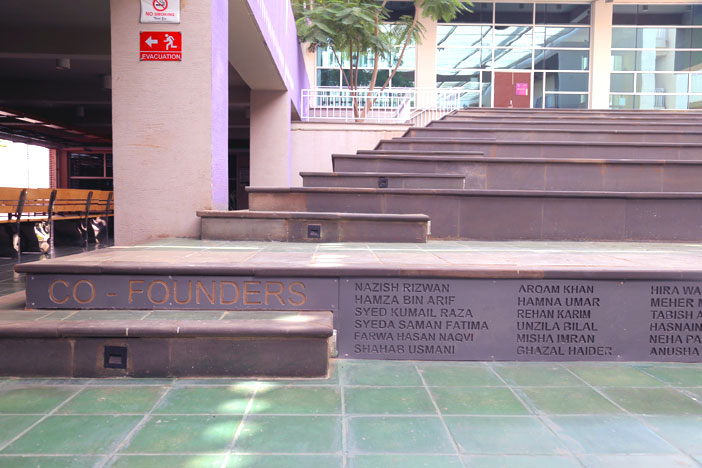 The Co-Founders hold a special place, and Habib University will miss the energy that the first graduating class brought and looks forward to their bright future.