You are at:Home»Convocation»Eighty-four Co-founders Graduate at Habib University’s First Convocation

5th May 2018 marked a historical milestone for Habib University as it celebrated its first inaugural convocation on its campus. An evening of many firsts, 84 of HU’s first batch of graduating students, called the Co-founders, graduated with degrees awarded from two schools. From the School of Arts, Humanities, and Social Sciences, 52 students received degrees of which 32 students received the Bachelor of Science degrees with Honors in Social Development and Policy, while 20 received Bachelor of Arts degrees with Honors in Communication Studies and Design.

The Chancellor Mr. Rafiq M. Habib’s official opening of the convocation was met with loud applause and all at the pavilion had become part of history in the making. Saadia Asad Pathan, a graduate in Communication Studies and Design, valedictorian, and recipient of the Dean’s Medal and the President’s Medal, spoke about the courage and trust required to share a vision, “… trust we put in you when we applied to Habib and you put in us when you took us in as the first ever students of Habib University.” She went on to say, “ just as you trusted us when we stepped into the university, trust us as we step out, trust that the vision you set forth has done what you wished and more.”

Founding President Wasif A. Rizvi thanked the organizers for a job well done and recounted the physical journey which transformed a barren plot of land into the state-of-the-art educational facility in a very short span of time. Highlighting the role played by the University’s international partners, he said, “the quality, validity, and inspiration of this journey has been greatly influenced by our global partners.” He lauded Texas A&M and Carnegie Mellon University for partnering with Habib University at the very earliest stage. 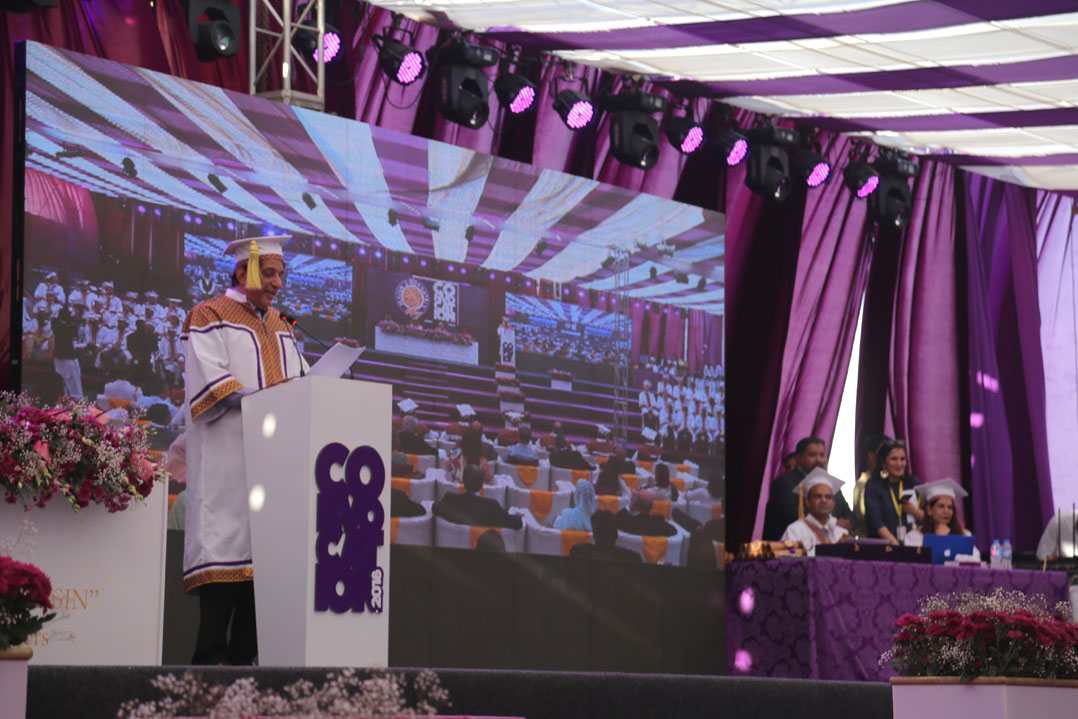 He spoke of the positive impact that international partnerships had on the students, with 50 per cent of the students having gone through international experiences, such as studying for a semester abroad, speaking at international conferences, or research internships. He added that the University’s mission of Yohsin had led to the coalescing of a large academic community, which over the course of the four years had resulted in the hosting over 200 events, where more than 300 scholars, entrepreneurs, business leaders, artists, deans, and cultural icons had all contributed to an extraordinary learning experience.

The President also pointed out that one of the cornerstones of being able to provide a Yohsin experience was the fact that Habib University provides over 90 per cent of its students with some sort of financial aid, the only private institution in the world to do so. He thanked Habib University supporters without whom this would not be possible.

Habib University Co-Founders: I wish you way more than luck. I wish you Yohsin. 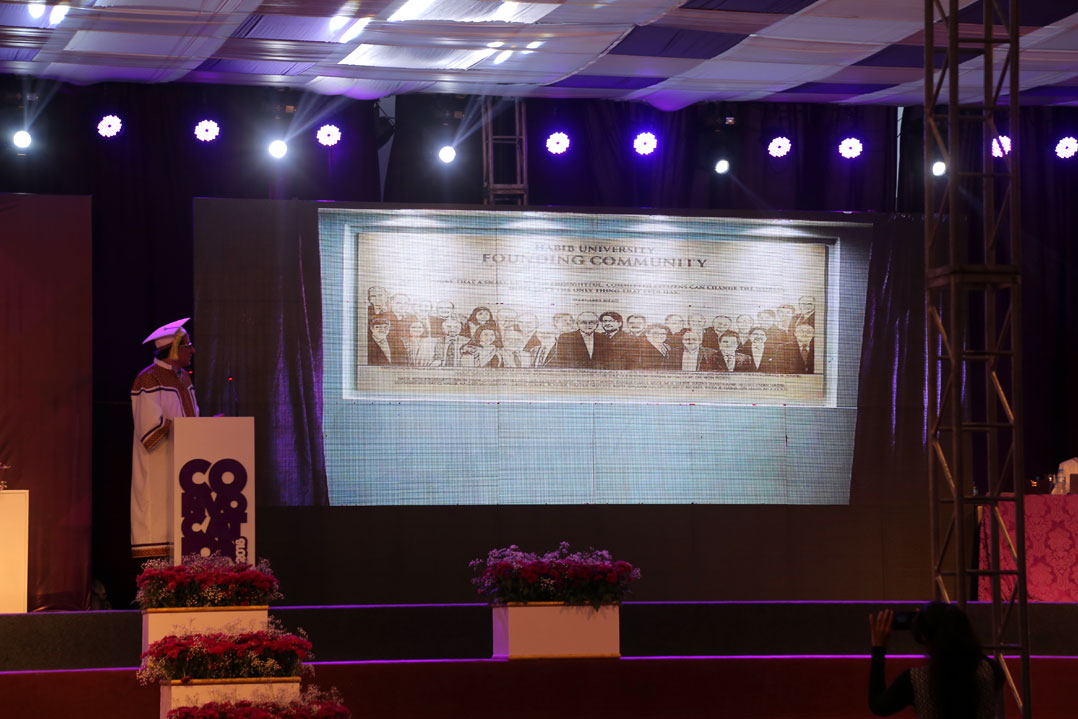 Throughout the evening, the founding community of Habib University which include the Board of Governors and the Board of Directors,were recognized for their immeasurable contributions to the establishment of the University. A mural showing the members of the founding community was also unveiled; located on the second floor, near the Office of the President, it will serve as a reminder of those individuals who had the vision to establish Habib University. 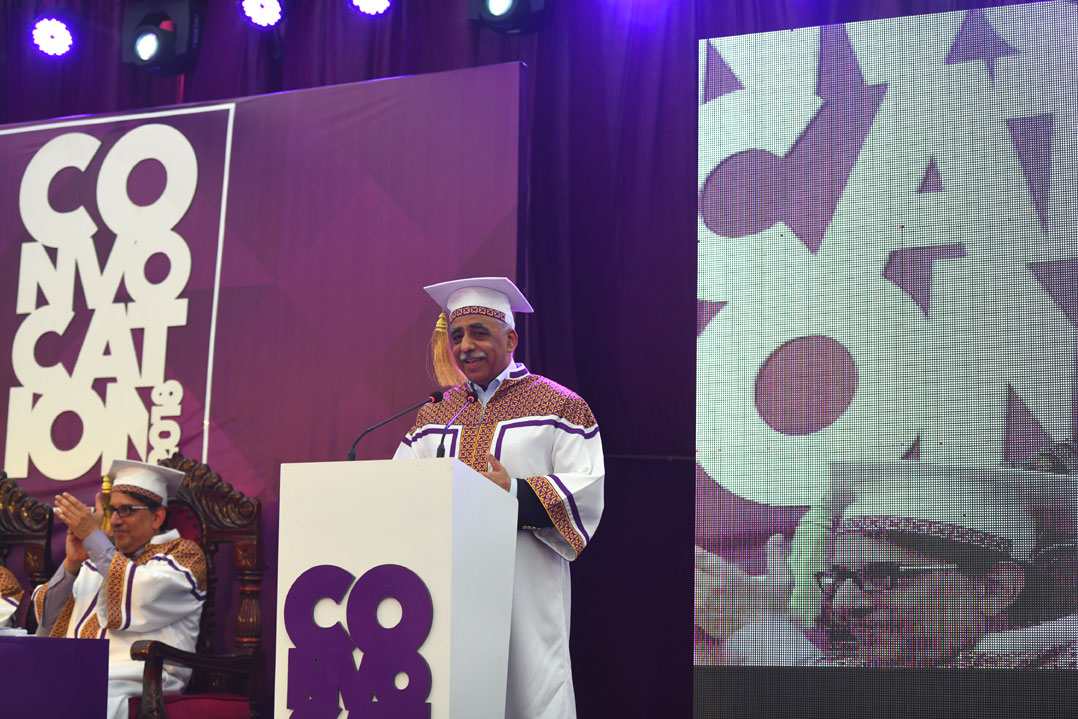 The Honorable Governor of Sindh, Mr. Muhammad Zubair, lauded the students for choosing Habib University and congratulated the parents for training their children to be such good learners. He also invited the top achievers to a recognition event at the Governor House.

Congratulating the graduates, Chief Guest, Syed Baber Ali said that the attainment of a Habib University degree was not the end, rather the beginning for a future quest for learning. He said that a tremendous responsibility now rested on their shoulders to establish the prestige of their university and of Pakistan and that they should stay humble, because it is humility which increases a person’s worth.

The Chancellor, Mr. Rafiq M.  Habib shared words of wisdom with the graduating class, stressing on them the power of honesty, integrity, and prayer. He stressed that one should first “deserve then desire.” Wishing the Class of 2018 all the best, the Chancellor said, “the journey has just begun and the best is yet to come.”

The Chancellor’s inspiring words were followed by the conferring of the first Chancellor’s Yohsin Medal, the highest honor to be awarded to any student. The award which is given in recognition of not just high academic standards, but also takes into account a student’s development in terms of the attributes of Yohsin – service, passion, excellence, beauty and respect – was awarded to Abdul Wahid Khan, a Social Development and Policy major.

The event was covered by local news bodies such as Dawn Newspaper, The News, Daily Times and Business Recorder.