You are at:Home»Office of Global Engagement»Raza Rumi’s Lecture on ‘Democracy and its Discontents: Project Naya Pakistan’

The Mahomedali Habib Distinguished Lecture on Pakistan is held at the University of California Berkeley every November; this year on 15th November, policy analyst and author Raza Rumi delivered the 6th such annual lecture that is named in honor of one of the leading figures in the history of the Habib family.
Mahomedali Habib was distinguished by his love for Pakistan and his deep commitment to education and philanthropy, so that the Habib family decided to endow an annual lecture series in his name. Through this lecture series the Habib family aims to improve and diversify conversations about Pakistan in the United States as well as create opportunities for US and Pakistan-based scholars to dialogue.

This year’s lecture was opened by Dr. Munis Faruqui, Chair, Institute for South Asia Studies. “This lecture series holds an extremely special place in my heart […] We have been able to put together an extraordinary ecosystem focused on Pakistan here at the Institute for South Asia Studies. […] Much of this is based on what was initiated in 2013 and the support of the Habib family and the Foundation […] to think expansively and imaginatively.” 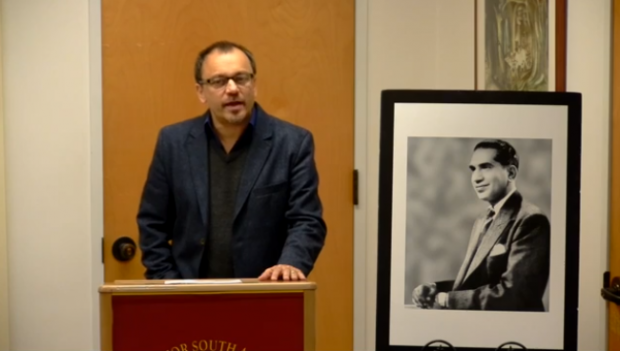 Raza Ahmad Rumi is a policy analyst, journalist and an author. Currently he is Director, Park Center for Independent Media, Ithaca College. He is also Visiting Faculty at Cornell Institute for Public Affairs and has taught earlier at New York University. As a journalist, Mr. Rumi’is currently editor Daily Times (Pakistan) and has worked in the broadcast media. Mr.Rumi worked at the Asian Development Bank as a Governance Specialist and has also worked on designing and implementing development projects for others. His academic papers as well as book publications have covered areas such as federalism, public policy choices, access to justice, citizen rights, and more.

Mr. Rumi started his lecture noting that “I am just a student myself, of Pakistan and the world.” Delving straight into the topic, “Pakistan’s unique history is a tale of a country trying to both search for its identity and the kinds of governance systems it wants to adopt”. From the inception of the country in 1947 this question has been explored time and time again, where the identity of the country and its people for the longest time have been defined in contrast to India. He argued that the question of the state’s identity is still an open question, contested between different groups, beliefs, and peoples. “These questions remain unresolved and one of the biggest problems that many political parties have faced is how to position themselves.”

“In this scenario the rise of Imran Khan and his brand of politics is both intriguing [and]we can understand it better by looking at the gradual state project of creating a whole narrative around Islamic nationalism.” Mr. Rumi went on to explore how history, mythology and anecdotal evidence can be used, amongst others, as lenses to interpret political slogans. 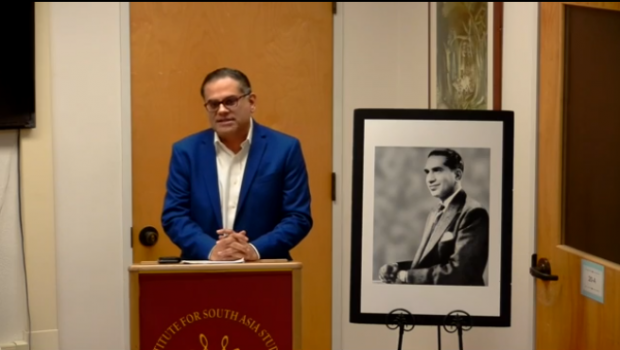 One of the major reasons for Imran Khan’s success is seen in the expansion of his support base, in the urban middle class in particular. Although Pakistan’s economy has been struggling over the last decades with the constant request for international bailouts, at the same time “the on ground reality is in Pakistan there is a flourishing consumer society” and exponential growth in remittances. Mr. Rumi specified that Pakistan’s growing middle class is extremely young, globalized and has growing influence on public spaces and the media, but like elsewhere evokes religious nationalism for popular support, as well as calls to get rid of the old traditional elites. “Imran Khan’s narrative not only echoes that but reinforces that.”

“The kind of shifts that Pakistan has been undergoing in the past two decades – all of this, the creation of the new middle class, high consumption, more engagement of the urban professionals in the national conversations and politics – means that there is a greater contest for a different shape and different future for Pakistan. And that is perhaps what Imran Khan’s promise of Naya Pakistan promises and denotes. It caters to these aspirations of an urban population who want a country which is governed in a different manner, delivers in a different manner and which perhaps has an alternative future trajectory. Of course these are open questions.”

Common to South Asian countries, Mr. Rumi elaborated, is the story of the post-colonial state reproducing the colonial structures, leading to “a lot of state-citizen disconnect, which the young countries have still to address. […] Power in real terms has neither been devolved nor decentered.” With Imran Khan also being a proponent of local governments, the “little more than cosmetic reforms in the police force” that he put in place as Khyber Pakhtunkhwa’s governor, “perhaps became a model for capturing the imagination of a lot of other voters during the 2018 elections.”

Ironically the disconnect between the current system and the yearning for change calls in for a strong man to ‘fix’ the system, and Mr. Rumi drew parallels to this in India: “there is a common trend that we see, both in terms of the clamor for change, something drastic to be done by a strong leader, and at the same time an over-emphasis on the power and charisma of a strong leader to do that.”

“This places Pakistan in a global moment of yearning,” which is a phenomenon not just seen in South Asia but also e.g. in Turkey, Brazil, even the USA where the popular narrative has pointed in the direction of “the larger global moment where we are seeing a rise of a very toxic brand of nationalism.” Mr. Rumi suggested that a new society is coming into shape due to these shifts, with a whole set of new aspirations – “but is it a new brand of politics? Not really. Because Imran Khan’s engagement with the national political scene is very much linked to the kind of rhetoric that has been used in Pakistan since its inception.”

Giving examples of the departure from some trends in the political system and its relation to society, military, media, and other sectors, he said that “Pakistan’s current tension or contest that is underway in the past decade or so indicates a political transition, and a society which is under transition,” which he expects to continue for the decades to come. “These anxieties will lead to, more than the project of Naya Pakistan promised by Imran Khan, a greater story is that how Pakistan is transforming into a different kind of society, both a political and a civil society which breaks from its past trends, and at the same time, how does it cater to the aspirations of a burgeoning population.”