You are at:Home»Events»New Semester Announcements at Town Hall

With the month of August just a day away, the staff at Habib University gathered in the auditorium for a Town Hall meeting on the 30th of July, 2018.

President Wasif Rizvi began by thanking the staff for being there, and commented on the events due to take place in the upcoming months, such as the annual Yohsin lecture and a name-changing ceremony for the Dhanani School of Science and Engineering, which will be held at the end of September 2018.

The President made a few other announcements as well- one being the renaming of the auditorium, and the other about the addition of two new majors in the programs offered by Habib University. 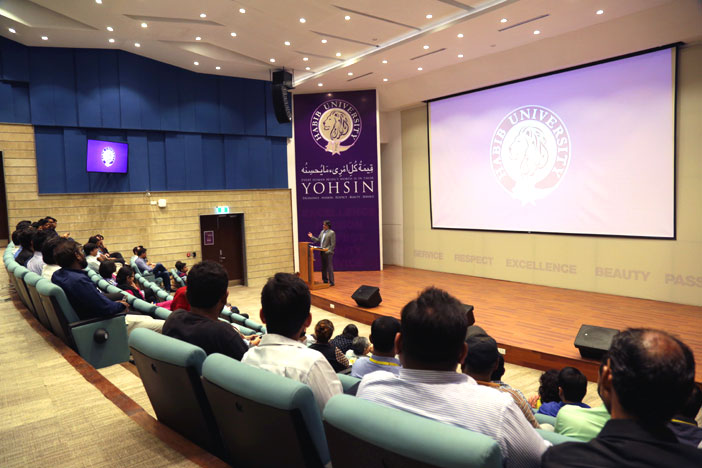 President Wasif then spoke at length about the “dark side of the age of technology”, where human beings seem to run and shy away from the idea of human interaction, where our connections with other people have boiled down to simple ‘like’ reactions on Facebook. He spoke of why the idea and reality that we seem to be being satisfied with just our phones and gadgets is scary and is something that should be rectified; focusing on the importance of truly connecting, talking, interacting, sharing, and growing with one another.

Moving on to the crux of the meeting, President Wasif spoke to the staff about how their individual and collective efforts have helped the University achieve its goals. Working together as a team, the University has made remarkable achievements, however, he stated that while he understood the focus has largely been on external factors, our best work can only be produced when the internal structure is paid attention to and taken care of as well. While acknowledging that collectively the staff may produce remarkable work, he commented on the need for “self-reflection and understanding” that is needed “to run like a well-oiled machine… there is a need to take care of the community within as well.” 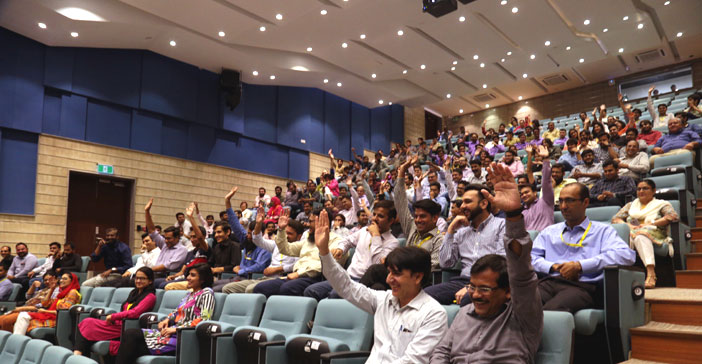 This lead to the announcement that effective on 1st August 2018, there will be only one working Saturday per month, which was decided in line with the aim to increase staff morale and comfort. A part of those working Saturdays will be dedicated to highlighting the achievements and interesting work/projects of different team members of each department’s staff members. The idea is also to uplift those who seem ‘invisible’ and loop in the community to share with and know about what different staff members are working on and achieving.

The meeting concluded on this happy note, after which lunch was served in the Tapal cafeteria and provided time for the staff members to share in the positivity of the moment and look forward to the new academic year.