You are at:Home»Events»Movement Explored as Visual Art by Naiza Khan

Transformation in urban cities has long been a topic of discussion among communities that value space, its relationship with culture and the arts, regardless of platform. Cities such as Karachi have hidden depths that only a trained eye can pick up on, but which add to the beauty and spontaneity of its daily occurrences. To shed light on the role of art in the city of Karachi, The Center for Media and Design (CMD) invited celebrated visual artist and curator Naiza Khan to relate her own experiences to students. The CMD held its first seminar on August 29th, 2016 at Habib University, with faculty member Saima Zaidi moderating the event.

Naiza Khan delved into the mysteries of movement and boundaries within cities, especially with regards to women, explaining to students her perceptual terrain behind works of art, including drawings, street art and sculptures. Exploring the political and social realities of the entity of women in Karachi, she showed several of her works touching upon both the movement and the restriction of such in a presentation through a range of mixed media. She spoke of the considerations of spillage, spontaneous making, transformation and mobility of form, focusing on the female gender in some regards.

“There are so many things we take for granted while living in Karachi. It’s important that we keep finding new ways to look at the city”, she said, addressing students. “As a visual artist, I’ve looked at the ways in which different works have been produced, and tried to link to such ways of seeing”. Speaking of a liberal arts education, she commented on the fact that visual artists represent what they see in very specific ways, that they interpret data in distinct ways. However, students of liberal arts are trained to go out and see the world, to collect information in a very individualistic manner through exploring the streets, interviews with the inhabitants of a city and utilizing information that can be executed in countless ways.

The artist also revealed how her recent projects, some of which have been a decade in the making, are focused on ideas articulated through sexuality and the confrontation of the female body in a public and private space. “I attempt to locate the body in a public space, and in a sense, reclaim some of these spaces”, she said. “What was most interesting to me was the reaction to the works of art in terms of location; some areas preserved the works, while some were quick to remove them, revealing the culture of the locales in a clear and distinct way”. 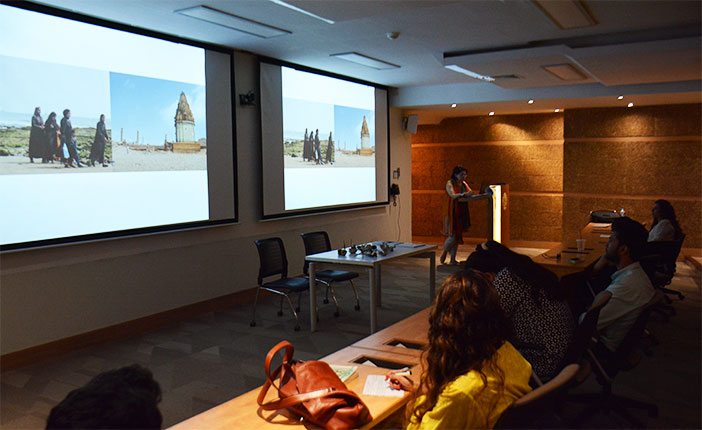 She also encouraged students to keep practicing their craft, and different forms of expression after thoughtful observation and scrutiny of their surroundings. “I look at drawing as the core focus for understanding the nature of an object, but you can find distinctive ways to do so, but practice is important. You can draw an apple set on a table, but, if asked to draw the taste of an apple, it may take you time. But your fourth or fifth drawing may not resemble the shape of an apple, but it will surely express what you feel is the taste of an apple”.