Habib University has always provided its students the opportunity to meet unique individuals who have incredible stories to share. One such individual who made a pit stop at the HU campus was the motorcyclist Moin Khan, on February 8th, 2016. Invited on behalf of the HU Adventure Club, Moin Khan led the attendees through the riveting journey wherein he shared his adventures on the road.

Born and raised in Lahore, Moin had led a comfortable and sheltered life. At a young age, Moin remembers, borrowing his carpenter’s motor cycle to ride around the block, he fell in love with motor cycles. You could tell, he explains, by coming inside his room which was plastered with posters of bikes of all kind. As many Pakistanis, Moin decided to travel to the US to pursue his undergraduate degree, where he kept his romance with motor bikes aflame by buying himself a bike.

He also felt a strong connection to his roots in Pakistan while abroad, commenting on the image portrayed in the media of the country.

The media would always portray Pakistan in a bad light, and I would keep on defending it!

Moin decided to combine his love for bikes and traveling, and planned a trip around the world starting from San Francisco and ending in Lahore, on a motor bike.

I’d worked 80 hours a week for 18 months, on a sorry diet of boiled rice and ketchup. But eventually I managed to save enough money to buy a competent bike and have just enough money on the side to make this trip, which took me an entirety of six months. 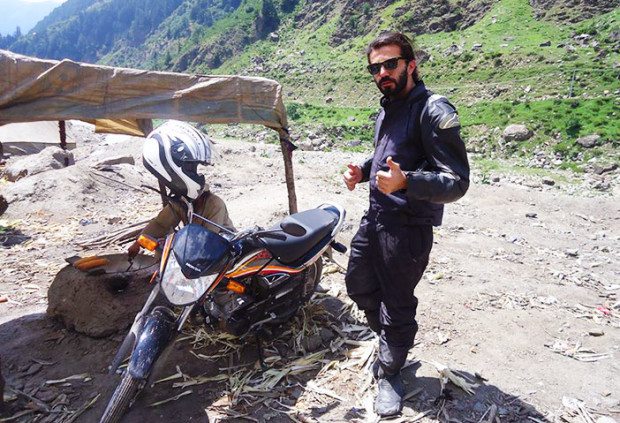 Recalling one of his favorite activities on the road, he said he loved to interact with the people on the roads and hear their stories.

Asking for directions is a great ice-breaker, and I made so many new friends this way.

After successfully reaching his destination and exploring half the world in the process, Moin chose to explore Pakistan as his next adventure, exploring the many beautiful sites that the country has to offer and documenting them constantly.

Moin now shares his experiences on Motor Cycle and Adventuring blogs- encouraging many foreigners and fellow adventurers to visit Pakistan and fight the negative image the country has in the international media. He concluded the talk by telling HU students that following ones passion is the hardest and most satisfying thing to do- and considers himself a lucky man for realizing and following his own. HU offers him the best of luck for the future, and hopes his adventures continue for many years to come.