You are at:Home»Student Life»HU Students witness Rare Maps and the Textile Arts of Pakistan at Mohatta Palace

On Saturday, 13th February, 89 first and second year students of Habib University joined staff from the Office of Student Life and Academic Performance for a trip to Mohatta Palace.

The Mohatta Palace Museum is a beautiful old Karachi building located near Do Talwar in Clifton.

On the first floor of the museum was an exhibit called “Drawing the Line” where students appreciated learning about historic maps and prints of the areas that make up Pakistan, along with the neighboring territories of Afghanistan, Iran, Central Asia, India and China.

The exhibition is presented in eleven sections and features over ninety rare and beautiful maps and prints, including the seminal Decima Asie Tabula, first published in 1486, and James Rennel’s 1788 Map of Hindustan, or the Mogul Empire.

Students from the Cartography course at HU were able to explain to their peers about some of the things they had been learning in the classroom.

In addition, students learnt about textiles in the “A Flower for Every Meadow” exhibit, particularly about how cloth is made, different types of dresses, and other details of the textile traditions of Pakistan.

The objects on display, over a hundred and fifty in number, were culled from amongst a collection of nearly a thousand items, the majority having been obtained on field trips across the country, commencing in 1972 in Tharparker, and ending in 2014 in the valley of Khaplu in Baltistan. One of the oldest and most unusual exhibits found in Shikarpur, a traditional Zoroastrian dress or qamis, circa 1860, testifies to links between the lower Indus valley and the Zoroastrian community in Yezd, Iran. 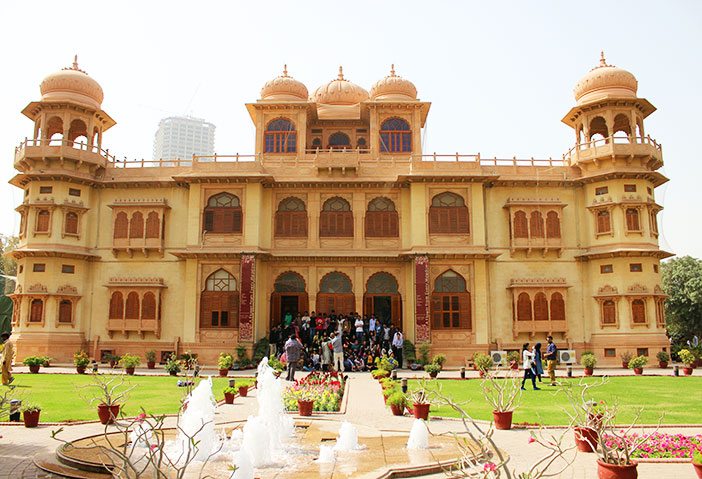 After exploring the inside of the museum, students enjoyed recreational activities in the gardens where they found peacocks, statues, and a fountain.

The Office of Student Life is enthusiastic to take students on future trips as well to the Quaid-e-Azam house, Frere Hall, Makli tombs amongst several other places.