You are at:Home»In the news»Hallyu to the World: The Incredible Rise of South Korea’s Cultural Economy

On the 3rd of November 2022, His Excellency Kim Haksung, Consul General of the Republic of Korea, and other Korean diplomats joined us at Habib University for a student-led session, “Hallyu to the World: The Incredible Rise of South Korea’s Cultural Economy”. The focus of the session was on North Korea’s geopolitics and South Korea’s pop culture wave (Hallyu), two aspects of Korea that continue to intrigue the public, especially the youth. The session was moderated by Tooba Bilal, a Social Development and Policy student from the Class of 2023.

The session began by observing a minute of silence in memory of the young lives lost in the tragic Seoul Halloween Crowd Crush on the 29th of October, which killed almost 150 people, mostly teenagers. Following the welcome note, H.E. Kim Haksung delivered a keynote address with a brief historical overview of South Korea’s rise towards becoming an Asian Tiger and one of the world’s largest economies. He highlighted the significance of soft power diplomacy by briefly discussing Korean entertainment, the influence and impact of Hallyu, and how the rise of South Korea’s cultural economy has translated into international ties between South Korea and the world. In addition to this, His Excellency shared his hopes for prosperous and improved bilateral relations between Pakistan and South Korea. 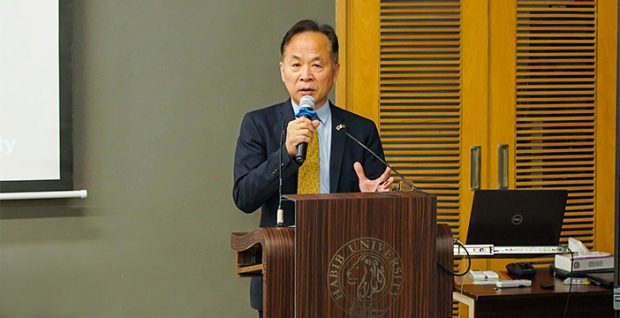 His Excellency Kim Haksung while addressing the audience during the session.

As the moderator of the session, Tooba Bilal posed several questions to His Excellency which expanded to regional security, the Korean wave, Korean culture and traditions, and future opportunities for students. His Excellency, drawing on his experiences and expertise elaborately answered each question. On the questions regarding relations between North Korea and South Korea, H.E. maintained that the priority of the Republic of Korea lies in maintaining peaceful relations with North Korea and delaying and eliminating the threat of war, and instead focus on building and maintaining a peaceful and prosperous relations between the two countries and others.

In his service as a diplomat, H.E stood witness to the way the Korean wave, depicting the cultural popularity of Korean entertainment has transformed and driven the youth’s interest in South Korea as a whole, and that its contribution towards promoting Korean culture stands unparalleled.

With his anecdotes and approachable tone, His Excellency kept the session engaging and relevant to the audience. Since most students were interested in the prospects of pursuing higher education in Korea, H.E. assured the students that Korea is the best place to pursue their Ph.D. Citing universities like Seoul National University, H.E. beamed with pride over the quality of education and the exciting prospects that Korean universities have to offer for international students. 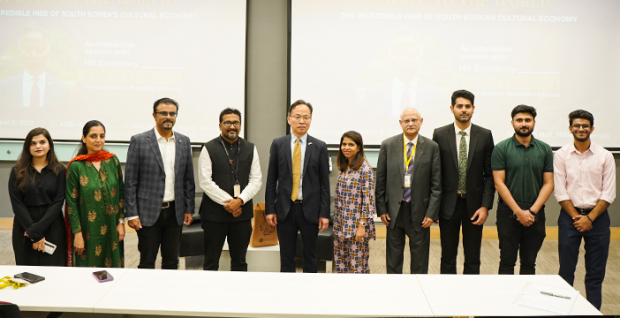 A group photo of Habib University Community with His Excellency Kim Haksung and Saud Hussain Kahlon from the South Korean Consulate.

Following this question, Tooba Bilal inquired about the prospect of a collaboration between Habib University and competitive Korean Universities over facilitating student or faculty exchange and the possibility of introducing Asian or Korean studies as a course at Habib University. The question was met with a positive answer, and his H.E. remained enthusiastic towards a possibility of such a collaboration. The session ended on the positive note of a possible collaboration between Habib University and the embassy of the Republic of Korea. His Excellency Kim Haksung, in his concluding remarks hoped that through events such as these, the embassy would continue to work towards establishing a mutually beneficial broad-based bilateral relationship between Pakistan and South Korea.