Habib University hosted its first Twitter space discussion on May 21, 2022 at 9:00PM (PKT), pioneering an insightful series of conversations titled ‘Pakistan’s Political Crisis: Through the Lens of the Humanities’ for people to build a better-informed understanding of the crisis the country has found itself in. The session was titled, ‘Political Crisis in Pakistan,’ and was a prelude to the series that will take place every Saturday at 9:00PM (PKT).

These conversations between journalists and academics alike seek to discuss and analyze Pakistan’s political turmoil in the light of the humanities subjects – literature, religion, history, and philosophy.

Listen to the full discussion here: 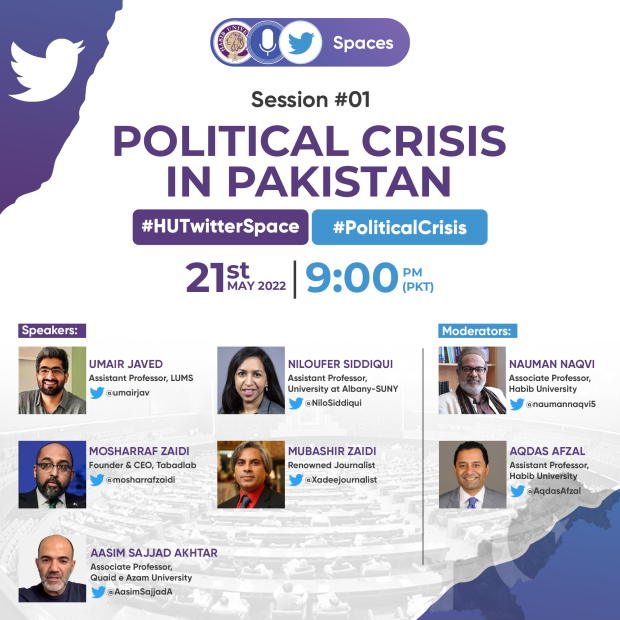 “Our world is engulfed in novel forms of political crises that are complex and multilayered. These multidimensional forms of crisis are now crystallizing in Pakistan as well, and therefore we want to look at it from the perspective of the humanities,” said Dr. Naqvi.

“Can we think of Pakistan’s politics like a marketplace where people buy what they like, and vote who they like? Whenever a new challenge presents itself to the system, the system goes into a state of flux – is this flux the crisis?” asked Dr. Afzal.

Mr. Mosharraf Zaidi identified three elements of this political crisis: the first is technology that has democratized discourse. This has both positive and negative effects, but the negative impact is more considerable in the cumulative and certainly more urgent when history, evidence, and research are involved. The second element he identified is the deprivation of rights in a country where danger lurks at every corner. This demands that we step back and think more deeply about the concept of deprivation instead of picking sides to it. He went on to say that this deprivation is not just economic but fuels a certain kind of adaptation and adoption of technology which we should be weary of. The third element is the elite’s incompetence which should be questioned from time to time. “Pakistan’s elite is among the most incompetent on the planet,” he said.

These three elements are fueling the political crisis in Pakistan and will keep increasing soon, he remarked. 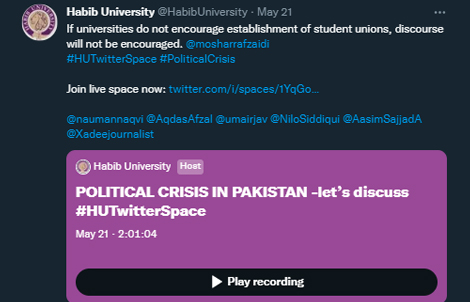 Ms.Niloufer Siddiqui addressed why we should care about polarization and what lessons can we glean for Pakistan in the study of this critical juncture. She spoke about a research study that found that voters in polarized societies are willing to trade off democratic principles in their electoral decisions and let undemocratic behavior slide – we are seeing this happening in Pakistan today, such as in the case of supporting former Prime Minister’s Imran Khan’s dissolution of the National Assembly. Therefore, it is true that polarization has negative downstream effects on democracy and can aid in democratic erosion. Ms. Siddiqui also noted positive aspects to this polarization in the form of strong party-voter linkages that are crucial to the functioning of democracy.

“Perhaps we should remain cautiously optimistic about what is to come,” she said. 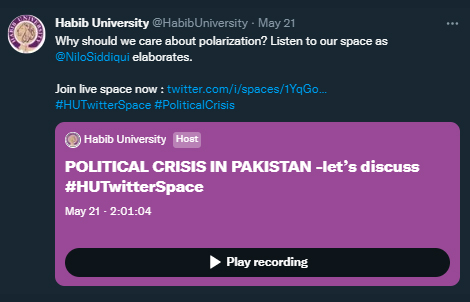 Mr. Aasim Sajjad noted that there are obvious effects of this political crisis coming into online discours, and have made a ‘society of the spectacle’ – gesturing towards Guy Debord’s 1967 work.

“The peripheries that need attention do not get it enough,” he went on to say. “We need to shift these crises from the molecular scale to the eyes of the common people,” he added. It’s the survival of the fittest here and if we ignore these subjectivities, the crises are bound to increase and often the people’s rage will be selective. 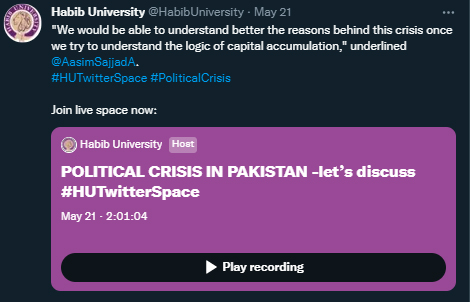 Mr. Mubashir Zaidi argued that Pakistan’s politics is a perpetual crisis. The privileged class affects democracy and always has, while there is no trace of the stake of the common people. The opposition parties take them into consideration as long as they are in opposition, but when they enter the government, their stance changes, and we have seen this happen repeatedly. Institutions falter because they do not reach the common people; the elite has always been the beneficiaries. “Those who have alternate opinions (such as scholars, thinkers, and policymakers) should become a part of this political system,” he said. The same story repeats itself where a certain kind of toy is created in a laboratory, programmed, and launched. Once that toy malfunctions, you rip it apart and begin creating another one. Empowering conversations should be brought to the government.

Mr. Umair Javed commented on the ‘desocialized sphere’ of Pakistan’s politics wherein the common people’s voices are not heard. Taking a structural perspective on why polarization exists and is clearly a symptom of both the structural contradictions that we find ourselves in. “Clearly the political system is failing at a very basic job which is to provide adequate representation of what people actually want which is what we aspire for in a democracy,” he stated. 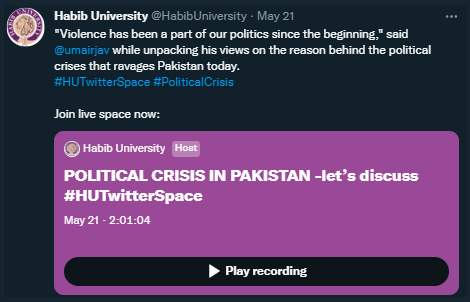 Looking at it from an institutional lens, there are certain lessons that we can draw from history, that say that political polarization has long existed in Pakistan. There were ideological markers that were reflected in the political crisis and conflict at the time. The current political crisis, however, does not have ideological premises. “There is not a lot of ideological disagreement between the parties but everyone is immersed in keeping the current state of affairs running.” The polarization is different because it is more geared toward factional intrigue. This can amplify violence especially through the magnitude of social media. He also agreed with Ms Siddiqui’s identification of people being divided along partisan lines. It might not be ideological again, but an affinity towards a political figure. We should be concerned about whether this current system can survive without controlling forces, he said.

In the closing remarks, Mr. Mosharraf Zaidi appreciated the organizers of this space and felt it was a great start to finding solutions together through conversations that did not bash or demean, but engage in open and thoughtful dialogue. Ms. Siddiqui shared that it is important to bring academics and journalists together in discussions to offer both a micro and macro lens. Mr. Aasim Sajjad noted that we need to bring these insightful conversations into the mainstream to ensure the mooring of the crisis and the articulation of politics, which is especially important.

The series will continue with its second episode on Religion and Politics on Saturday, 28th May, 2022 live on Twitter Space.

Set a reminder for our upcoming space:

Set a reminder for our upcoming Space! https://t.co/ZU6Yn82uEI