You are at:Home»Events»Freeing ourselves from The Inheritance of Injustice

Habib University aims to create open-access public spaces for intellectual engagement in a region which lacks both. In doing so, HU has created a name for itself as an unmatched facilitator of intellectual discourse and learning.

The third annual Postcolonial Higher Education Conference (PHEC) was held at Habib University on 14th October, 2017. The conference, themed The Inheritance of Injustice, addressed issues of colonialism that are prevalent in current times. Speakers brought to the table new understandings and phenomenon focused around higher education and the dire need for ‘the de-colonialization of knowledge’. 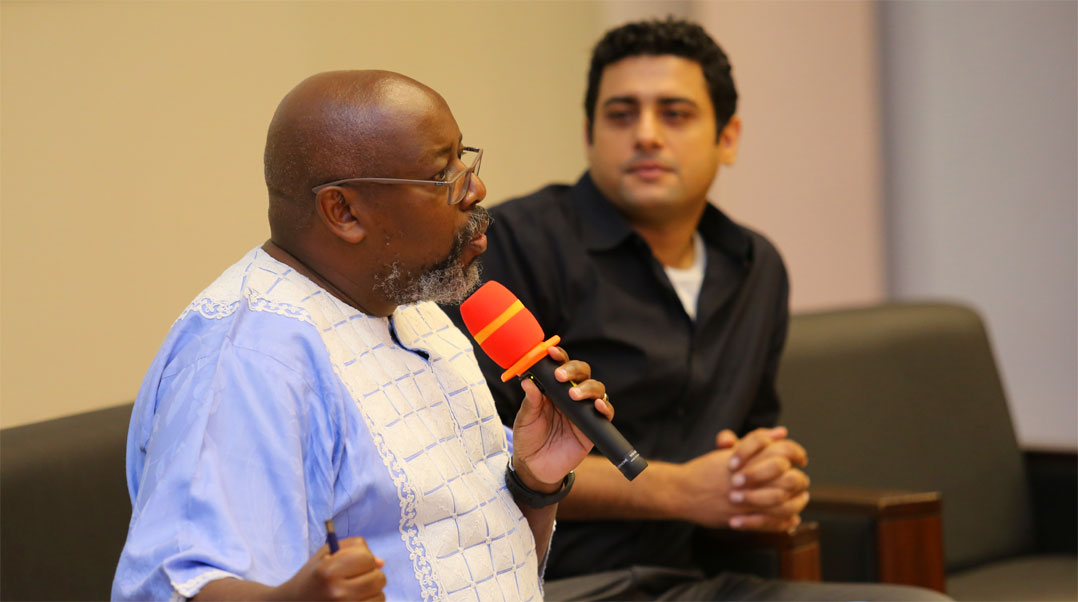 Dr. Mwangi wa Githinji, Associate Professor of Economics from the University of Massachusetts- Amherst in USA, and keynote speaker of this year’s conference, praised Habib University for taking a leap of faith in creating a Liberal Arts institution in a post-colonial era, stating:

It is a Liberal Arts education that has the ability to create citizens rather than subjects.

By addressing the question of “how can you have just development if you have a structure that is fundamentally unjust?”, Dr. Githinji compared the similarities in the structures of countries in the southern hemisphere, and provided an understanding of why these societies are currently unable to advance their development.

Language is the carrier of culture and I am extremely happy to see that students in @HabibUniversity have to learn a local language. #phec pic.twitter.com/Wr1ApqJSLY

Following the Keynote address was a panel discussion titled Imagining Post-colonial Politics. Dr. Suren Pillay from the University of the Western Cape in South Africa began the talk, bringing to light questions about the curricula in learning institutions, and the decolonisation of knowledge, which remains relevant to all nations who share similar histories. He discussed “possible ways to reconstitute an account of genealogy of the modern state in Africa, and how this might be done in a less Eurocentric way”, and suggested telling more stories to create one’s own memories. 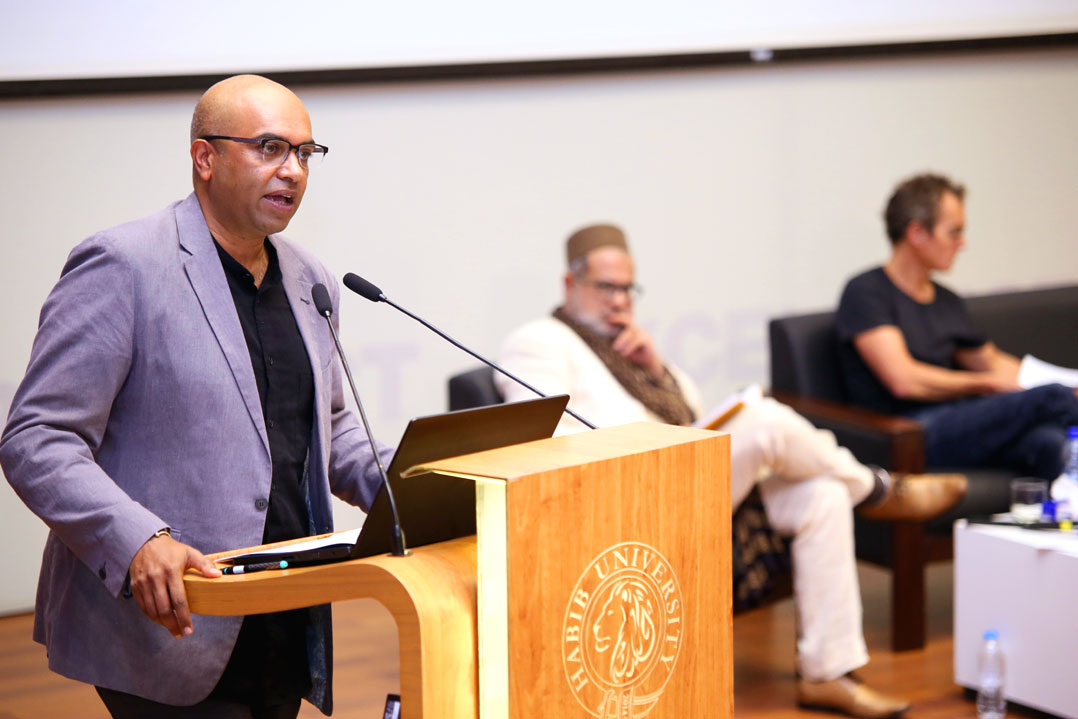 Dr. Peter Hallward from Kingston University in UK questioned the concept of ‘the will of the people’ stating there are “several ways that past injustices cast a shadow over political self-determination in the present.” 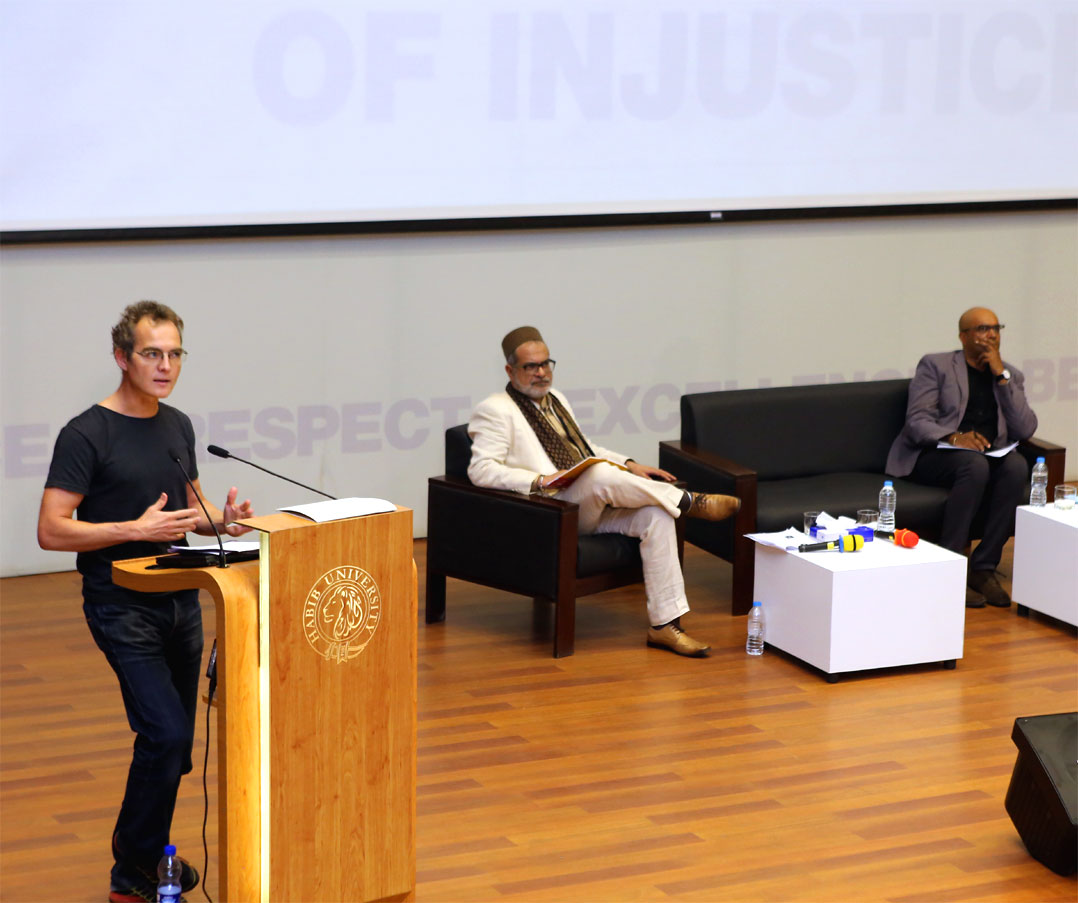 Drawing from his recent project, The Will of the People, he focused on the ideology of free will in a democratic political system.

The second panel on Confronting a Fractured Past set the stage for the creative works of two authors of novels, both well-known in academia. In conversation with Dr. Asif Aslam Farrukhi, Dr. Minoli Salgado from University of Sussex in UK, spoke about her inspirations and experiences of writing her book, A Little Dust on the Eyes. Dr.Salgado explained how writing about trauma can help people perceive facts:

In terms of relating to an event there are many different perspectives but it releases you as a writer, recognizing what you are doing is mediating someone else’s trauma.

Her creative expression stems from her experiences of living in Sri Lanka, and watching the horrors of a civil war that perpetuated injustices around her. Dr. Salgado ended her talk with a dramatic reading of her poem, A Feast of Words.

Dr. Minoli reading out an excerpt from her book ‘A Little Dust on the Eyes’. The kind of mastery one should strive for. @HabibUniversity pic.twitter.com/XDzlNKTbtn

Dr. Sabyn Javeri, an award-winning short story writer, renowned academic novelist and Assistant Professor at Arzu Center for Literature and Languages at Habib University, spoke of feminist literature which has existed in the subcontinent throughout the 20th century – such as Ismat Chughtai’s The Quilt or Lihaaf. Dr. Javeri shared her experience of teaching feminist fiction in a postcolonial context to Pakistani undergraduate students. Reading an excerpt from her best-selling novel, Nobody Killed Her, she showed the audience two things: the wide-ranging hurdles women face in a classist and patriarchal society, and how literature can be a powerful tool for political resistance of all genders.

A v engaging session on how class informs the experience of #gender with @SabynJaveri at @HabibUniversity postcolonial higher education conf pic.twitter.com/671lWof0x6 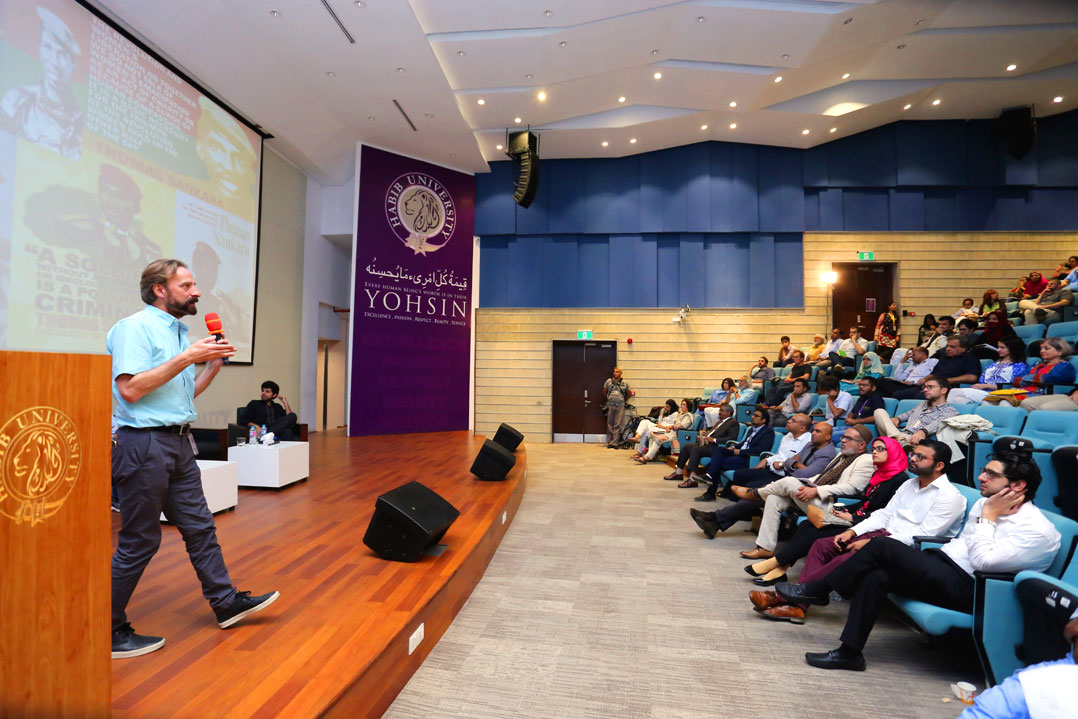 Exploring postcolonial labour relations, he spoke of how the quality of life of the economically marginalized can be improved, particularly through trade unions. He argued that African trade unions, while existing and active, are still disadvantaged and hindered because of their European roots, e.g. they still represent wage labour over the majority of those who work in the informal sector or are self-employed.

Inheritance, and in this case the inheritance of injustice, is popularly understood as being a product of an event of the past. Dr. Azhar rejected this notion because he believed that it is very much present and existing – “in the food that we eat, the tea that we drink, the sports which we play”. It was interesting to know that the ‘ICC’ (International Cricket Council) is derived from its former name, Imperial Cricket Council. He argued that:

If someone believes that Pakistan or India or Kenya can become like France or England you’re wrong because if you are enamoured by the richness of England you have to understand the dialectic that England is rich because India is poor. 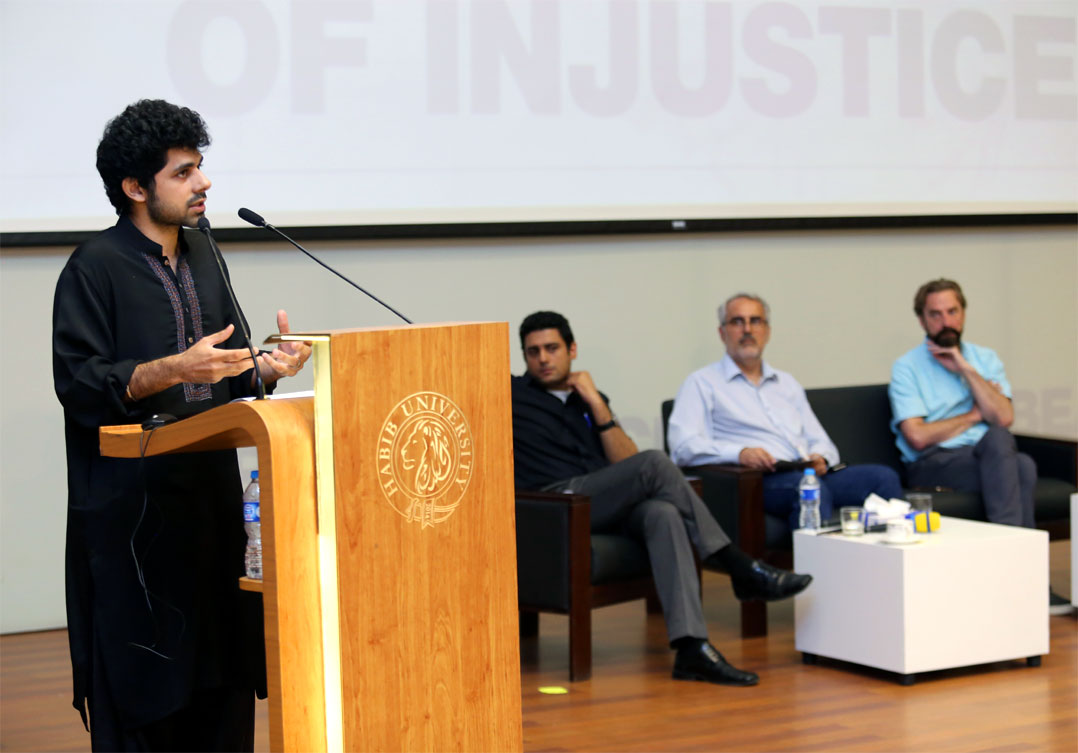 The last speaker of the day was Dr. Ammar Jan, who has a doctorate in History from the University of Cambridge and is an Assistant Professor at University of Punjab. He spoke about the formation of communist thought in colonial India, suggesting to look beyond the popular notion of Europe being an icon where ideas originate and develop. His paper was “an attempt to locate and identify the novelty of the anti-colonial movement brought forth so that finally the inheritance of injustice can be matched by the legacy of justice and emancipation from within our own lands”.

The conference concluded with a performance by Shah Jo Raag fakirs from Bhit Shah, who took the audience through a soulful journey of Sufi music. 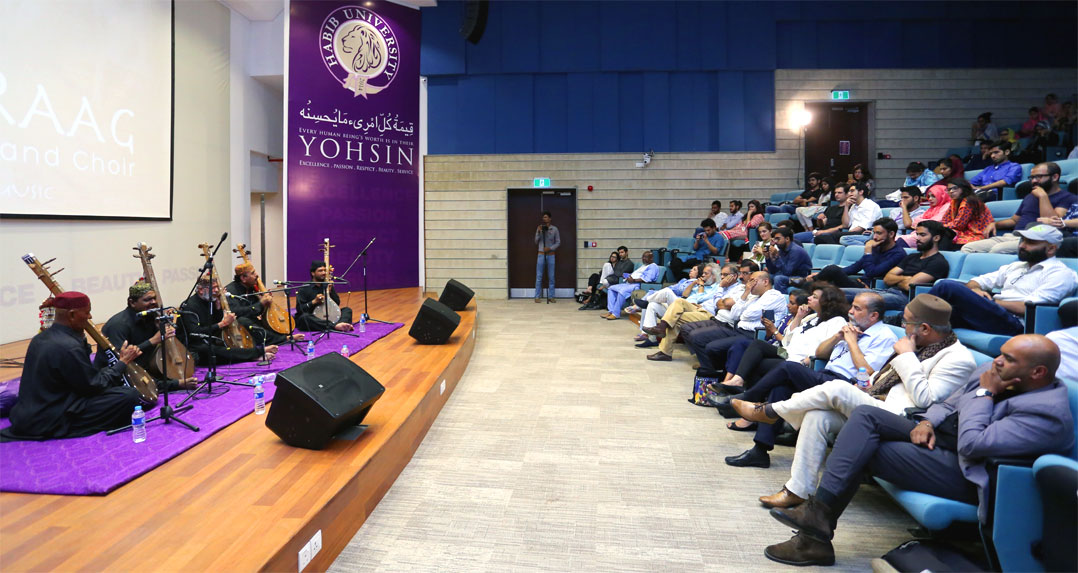 Habib University’s selection of speakers and topics comes from a rudimentary understanding of relating our indigenous history to current times, and using this cognizance to move forward. Discovering our past is an important step towards perceiving the present, and in light of that we need to critically analyze our plan to advance development of our nation state.

The event was covered by local news bodies such as Dawn News, The News, The Nation, Daily Times and The News on Sunday.