Habib University’s Dhanani School of Science and Engineering on 13 April, 2019, organized an Earth Day Symposium at the Tariq Rafi Lecture Theater. Experts and activists came together in the symposium to raise awareness on environmental issues affecting Pakistan.

Through Habib University’s unique combination of the sciences and the arts, different sessions were held throughout the day which highlighted the role that education, activism, literature and music can play in inspiring environmental action. 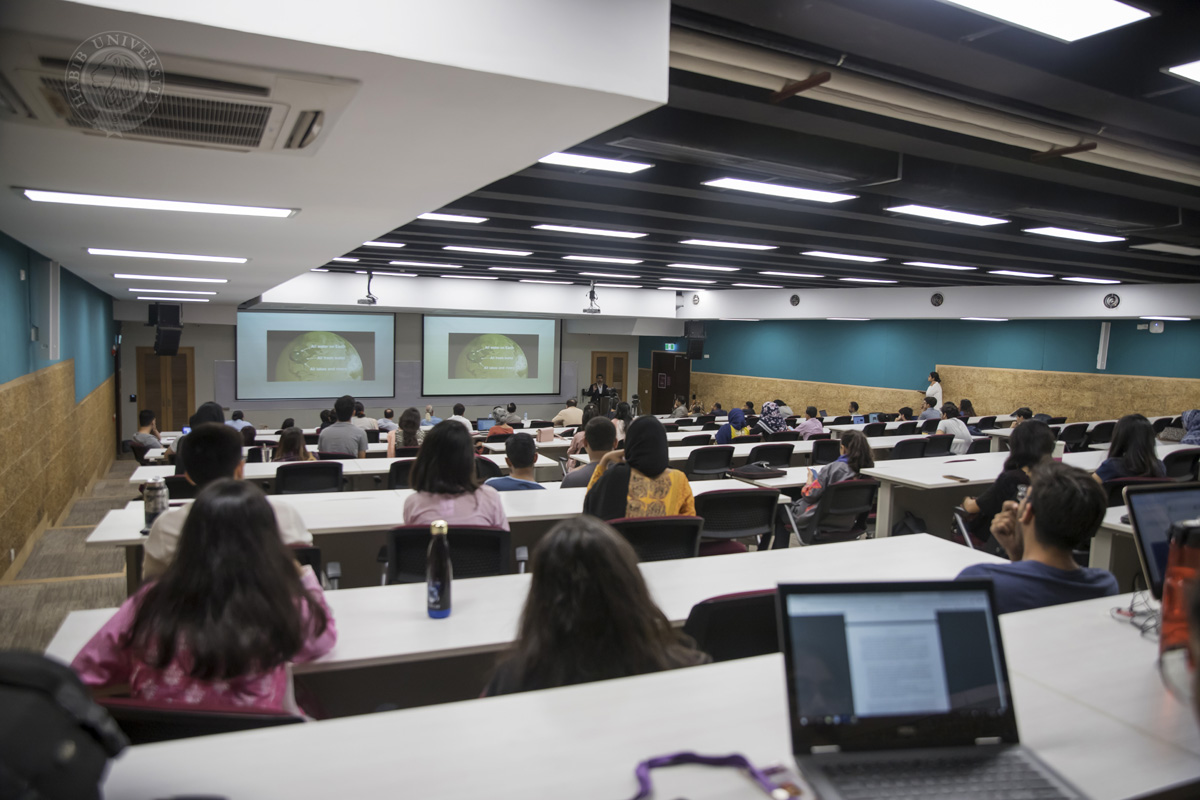 In the words of American astronomer and science communicator Carl Sagan, who was quoted during the symposium, “the Earth might not seem of any particular interest. But for us, it’s different… On it everyone you love, everyone you know, everyone you ever heard of, every human being who ever was, lived out their lives.”

During the opening session, renowned environmental lawyer Rafay Alam delivered a special lecture on the environment from a legal perspective. Mr. Alam said that he was, “deeply honored and grateful to Habib University for organizing this event and for highlighting this important issue.” 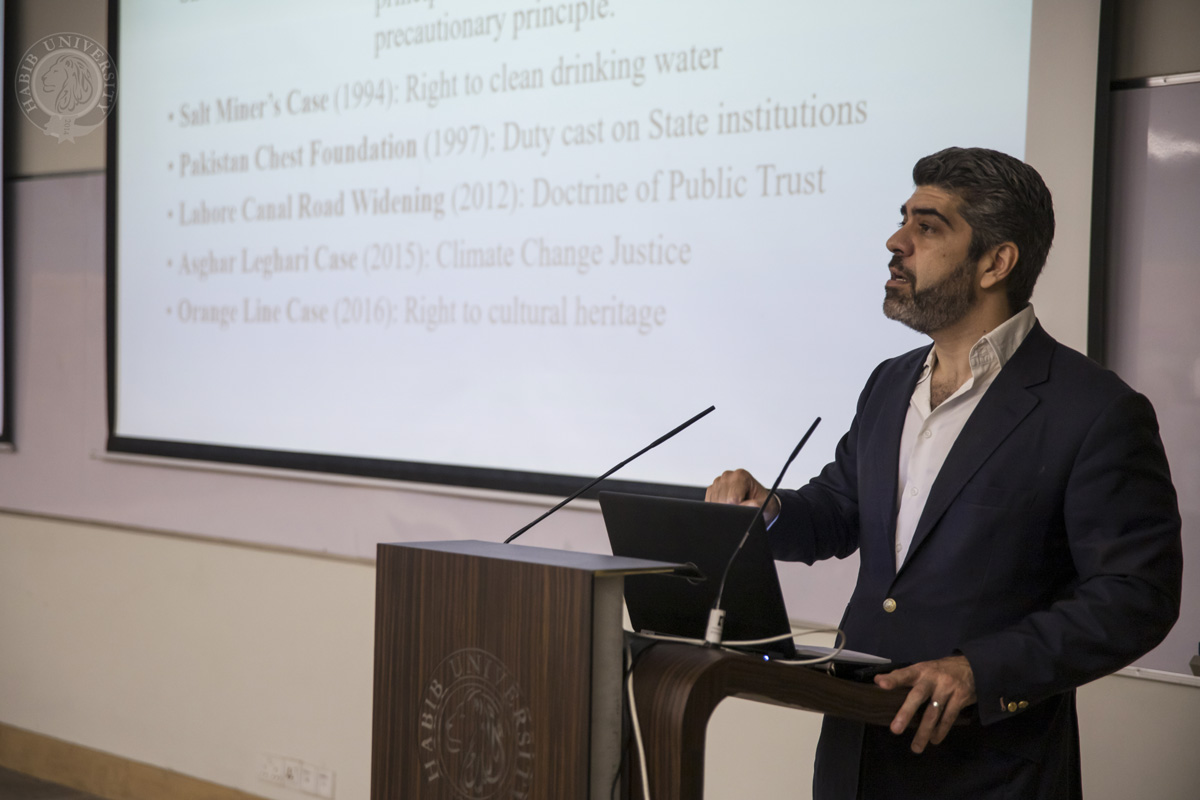 Citing important cases and positive precedents set by Pakistan’s judiciary, he said that the major environmental challenges which Pakistan faces include water pollution, air pollution, and climate change. Mr. Alam said that the country needs to take important steps to tackle each of these areas.

The speakers highlighted important points during their discussion and spoke about how much progress Pakistan has made towards achieving the Sustainable Development Goals (SDGs), set by the United Nations to end poverty, protect the planet and ensure that all people enjoy peace and prosperity. 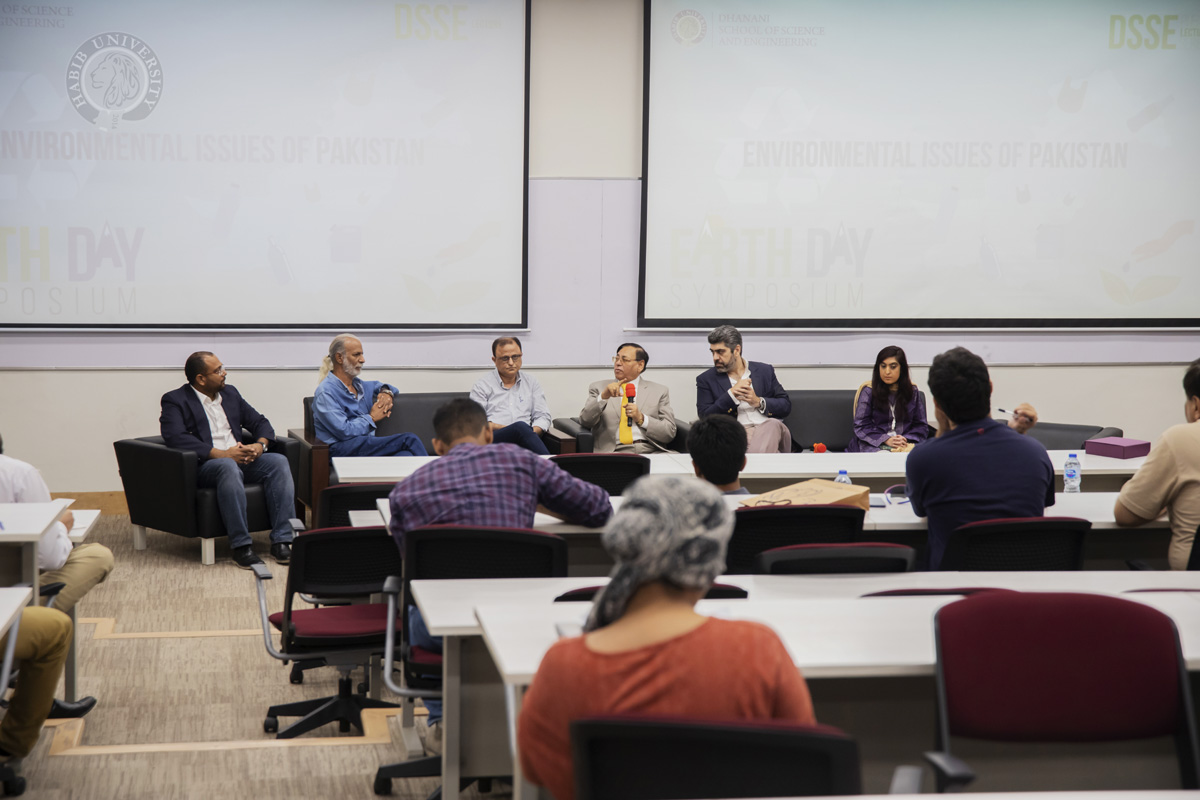 Mr. Khan said that Pakistan’s parliament was the first in the world to adopt SDGs as its National Development Goals. However, it was also pointed out that while the country has accepted international environmental treaties, in terms of implementation much more needs to be done.

Mr. Anwar discussed the connection between urban planning and climate change in the Pakistani context. He informed the audience that “battles related to climate change will be fought in an urban landscape.” Mr. Anwar pointed out some striking statistics, including the fact that by 2050, more than 75% of the global population will be living in an urban environment.

In this context, he explained that Pakistan is urbanizing at a faster rate than any other South Asian country, which will inevitably have an impact on its environment. 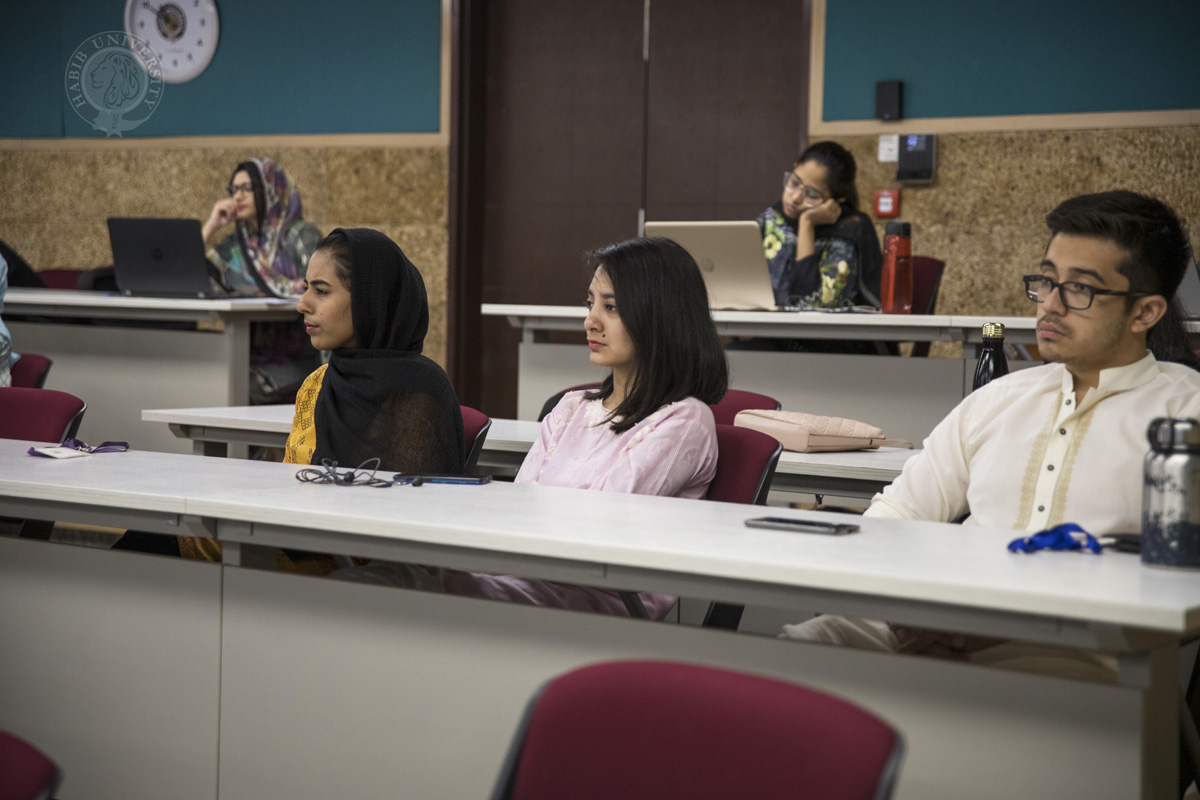 Mr. Pasha said, “Nature is about creating balances…the need for natural resources and economic activity should be balanced with preserving the environment.” The panellists told the audience that lifestyle and behavioral changes are part of activism as well, with environmental action only possible through individuals in society leading by example. 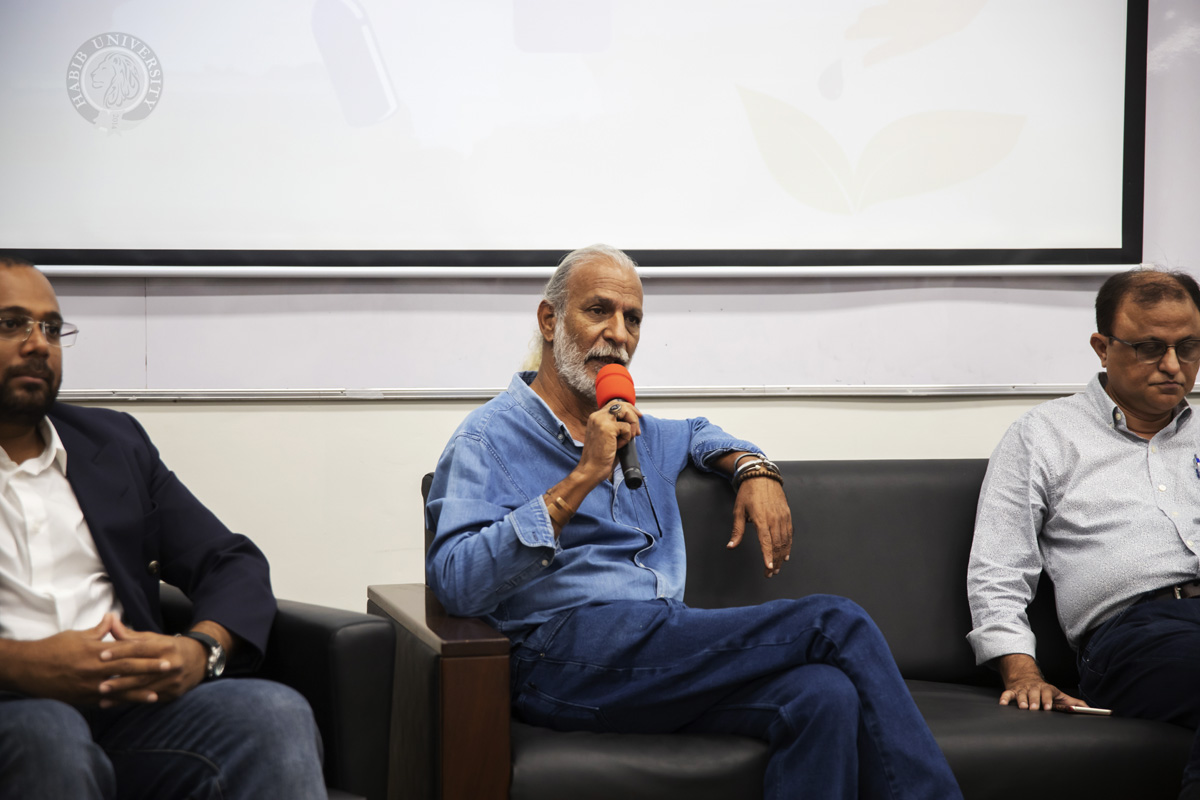 The third and final session of the symposium, Literary Expressions and Environmental Issues, was in collaboration with Habib University’s Arzu Center where a discussion held between Habib University’s Dr. Asif Farrukhi and renowned scholar, author and short story writer Dr. Nasir Abbas Nayyar.

Dr. Nayyar spoke about how the environment has been a recurrent theme in literature and poetry throughout history. “Man is not just part of a society but is also part of the ecology and literary traditions going back centuries reflects this,” he said.

Dr. Nayyar said ancient mythologies speak of how nature sustains life, and that there have been poems and short stories in which the natural world held humans accountable for their conduct and their impact on the environment. He gave examples where fallen trees are regarded as dead bodies that have been murdered, reflecting the importance nature holds in literature. 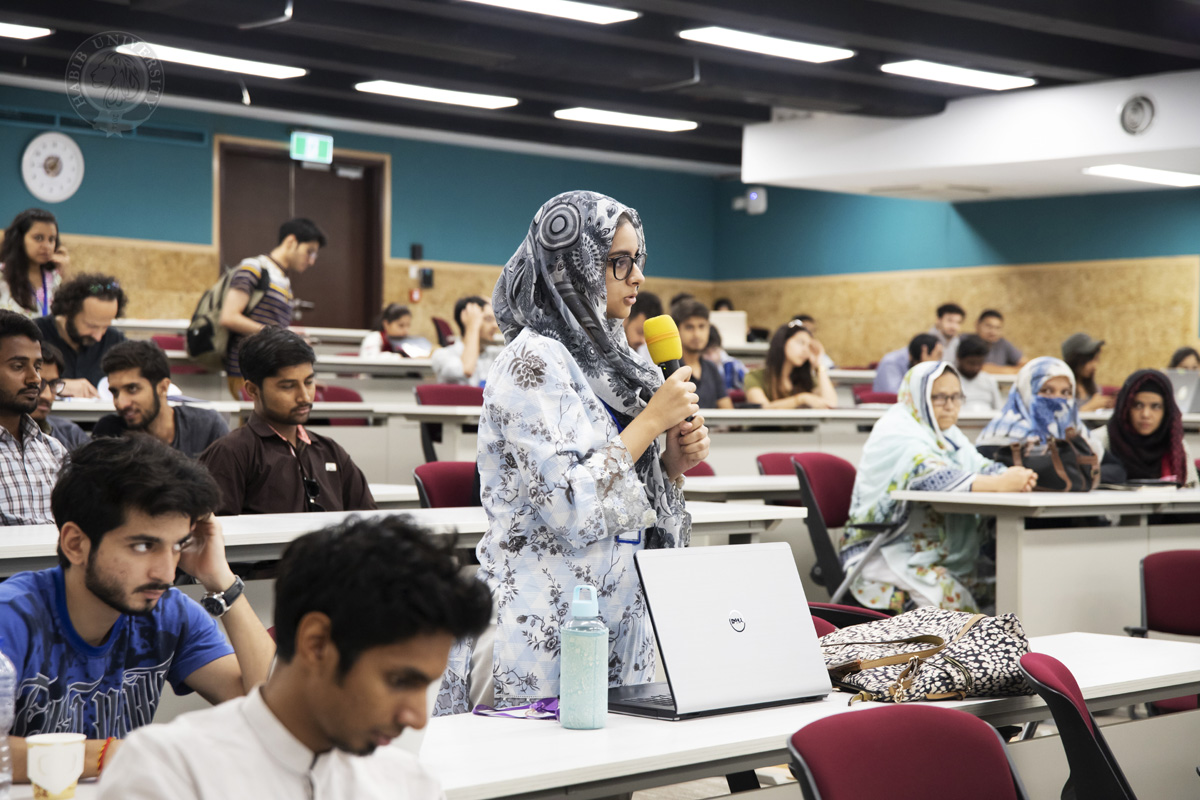 At the culmination of the symposium, a musical event was held in which songs were performed that reflected a synthesis between music and the environment, and the important role of the performing arts in ecological activism.