You are at:Home»Conference»Tracing decolonial thoughts in an apocalyptic world

Centuries of colonial rule in the world continues to impact lives today. Try as we might, we cannot escape our imperial and colonial past reflecting in our current state with our ecology, politics, religion and economics, and knowledge-making under immense threat. To be able to repair our world, we will first have to repair our collective consciousness and change the very way we think so that we can at least begin to envision a healthier world.

In realization of the post-colonial quagmire that humanity finds itself in, Habib University hosted its seminal event, the fourth Post-colonial Higher Education Conference from the 22nd of March to the 27th of March 2021, with a ubiquitous theme of “Reparative Futures: Decolonial Thought in the Global Ruins”.

Spanning five thematic sessions which addressed the crises of yesteryears and the present, the conference featured esteemed speakers and post-colonial reparative thinkers from across the globe who shared enlightening and thought-provoking views, prompting renewed resolve and action. 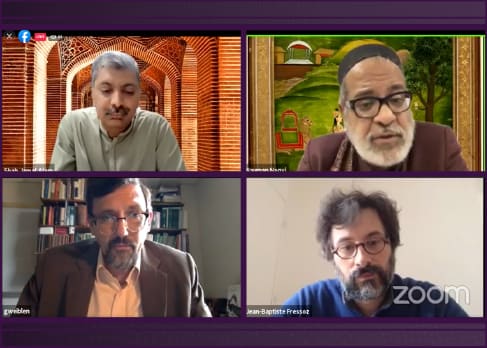 The conference began with a discussion on “Repairing the Biosphere”, where renowned environmental historian Jean-Baptiste Fressoz spoke about how colonization used the argument of “restoring nature” as a tool for cultural domination. He disclosed that they never entered the Anthropocene in a kind of blind modernity; “the economy of nature has had a long pedigree and heritage,” he argued.

To understand how to forge solutions out of this predicament, we need to be aware of a proper history of the Anthropocene.

Professor George Weiblen, Science Director at the Bell Museum at the University of Minnesota, narrated his journey to Papua New Guinea and of discovering the unique relationship between cultural and biological diversity. He advised learning from diverse societies such as Papua New Guinea to become more resilient in the face of change and to try to live with the limited resources we have while acknowledging that nature, in the end, is the only thing that can truly repair us.

“It’s the social, cultural and human connections that are absolutely critical, even more, important than technology, as tools to repair and envision a better future,” he said.

The neoliberal machine, they contended, has failed to tackle the crises brought about by the destruction of the biosphere as is evident today. 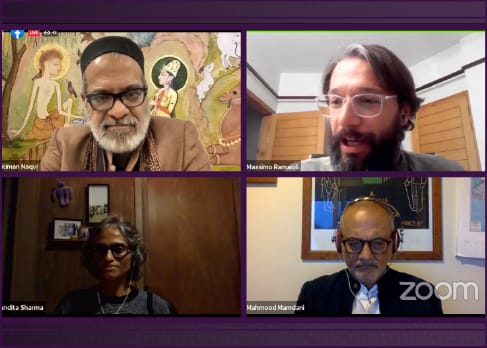 The second session revolved around “Repairing Politics” where Professor Mahmood Mamdani, Herbert Lehman Professor of Government and Professor of Anthropology and Middle Eastern, South Asian, and African Studies (MESAAS) at Columbia University and Director of the Makerere Institute of Social Research in Kampala, Uganda, spoke about the different ways of thinking about political identity – one that is historical and changeable and the other being natural and permanent. He suggested decoupling the nation and the state as we seek an alternative to the modern nation-state.

He suggested that one-state solutions over the two-state solution are ideal because it provides the political context for alliance-building to an emancipatory struggle. In this context, he proposed taking South Africa’s transition from Apartheid as a glimpse of the vision for a third alternative.

Nandita Sharma, professor at the University of Hawaii, claimed that post-colonialism has marked the end of the legitimacy of imperial states and the beginning of national self-determination. In the post-colonial new world order, being a member of the nation in possession of territorial sovereignty is the ‘thing to be’ or to become. Only by organizing as a nation can claims to power in this system be heard. Claiming to have liberated people, post-colonialism liberated capital instead with borders, immigration control and the concepts of citizenship and nationalism as mere tools of control.

Sharma presented the vision of a world without borders. She highlighted that a world beyond post-colonialism would simply look like a more inclusive nation-state. Thus, what we need is a post-national state – a state that acts as a system of protection without demanding adherence to one or another form of identity. 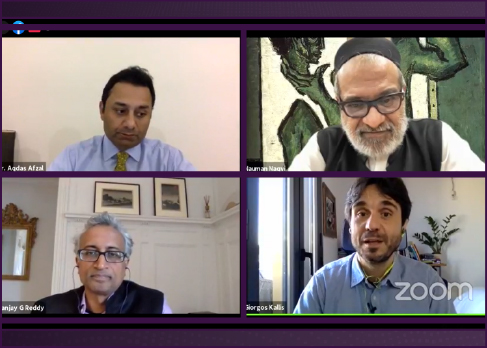 Repairing Economies emphasized the idea of ‘degrowth’ in the context of post-development and how the standard models of growth-based development were essentially western-inspired. The scholars who discovered this argued that the colonizing process continued in the guise of development projects that the West exported to the rest of the world and through it, controlled what the US and Europe wished to control: a flow of natural and human resources to economies, low price of labour, and low prices of natural resources.

Dr. Giorgis Kallis explained that critiques of growth posit that it has a link to the process of colonization. This sort of ‘imaginary capitalism’ began with early capitalism in 18th century England and was exported to the rest of the world. The universe allows GDP growth-based economic development and there are very few alternatives to this, not to mention, very few voices to question the model itself. In essence, however, it is a colonizing imagination, he argued. This process from the very beginning has been integrated with the process of colonization from those who wish to show us the good side of economic growth and capitalism.

He proposed the idea of “degrowth” as a decolonizing proposal.

“It seems to be an impossible alternative when thinking about turning capitalist economies into those that would not die,” he added. “But the very fact that the alternative is impossible is an invitation for us to think hard about how can we make degrowth a reality.”

Dr. Sanjay Reddy questioned our obsession with growth regardless of the cost it entails. In every country of the world today, zero growth along the current pattern would be akin to a social and economic crisis because it would mean increased levels of unemployment. We demand and need growth on the existing pattern of how economies operate simply to stay still for unemployment. Reparative futures, he concluded, is a call to reimagine and avoid repeating past mistakes. 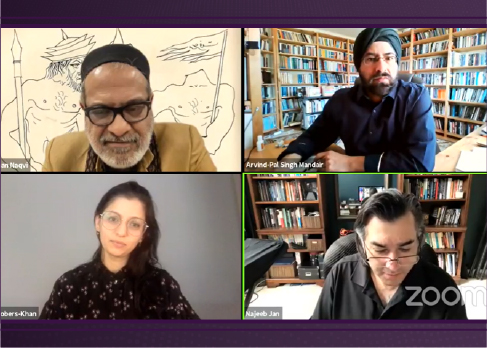 The session on “Repairing Religions” offered activism by suggesting the occupation of thought itself. Arvind Pal-Mandair, a professor at the University of Michigan, argued, “we need to reclaim epistemic sovereignty, reprogram the matrix, and to ‘diasporize’ philosophy itself. To try and understand philosophy, to reclaim it, and show that it is also a product of diasporacity.”

Nur Sobers Khan, a director of the Aga Khan Documentation Center at MIT, spoke about her projects; one maps out how colonial violence destroyed Muslim life world in colonial South Asia while the other is a reality-creating, ontologically generative conceptual art project consisting of two networks of Artificial Intelligence – one interprets dreams and the other generates dreams using artificial intelligence. 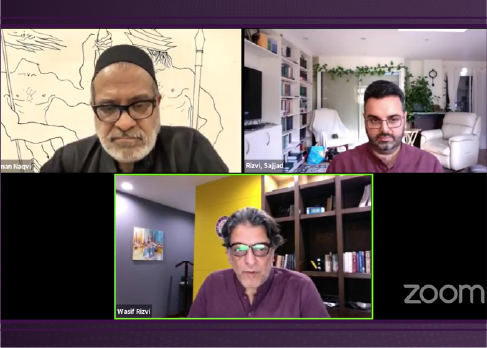 The final session, Reparative Ends, focused on a possible conclusion aiming to highlight responses to frequently raised questions of purpose and grief.

Conference Chair Nauman Naqvi presented his paper on “Repairing Cognition: The ends of Experience”. He highlighted the abysmal alienation from our own experience and questioned literate people in their quest to imagine themselves as pure spirits indicated in their self-understanding as the most morally elevated beings in history, virtually pure and innocent moral and spiritual beings. He argued that the political manifestations of this bizarre phenomenon is the growth of anti-corruption fascist politics. Those who relatively benefit or thrive in this corrupt world order means taken for ends, are corrupt in the very forms of life. He pinpointed the doctrine of progress as the primary agency behind this detachment.

Read the blog: Why post-colonialism matters to us

Sajjad Rizvi, Professor of Islamic Intellectual History at the University of Exeter, and his accentuation on messianism as an apocalyptic look towards the future beckons us to overcome binaries and to repair our ability to dream that the postcolonial world has robbed Muslims off. He highlighted how expecting the arrival of a messiah is the expectation of relief after intense imposition, and this is the eventuality of humans.

The ultimate reparative end is in understanding this potentiality.

With each session, ideas and perception became frescos of individual thought finding commonality in an era hopeful for reparation. A sequel session featuring student reflections discussed insights and takeaways from the conference with Dr. Nauman Naqvi. In tandem with the course, “What is Modernity?” the session provided possibilities of amendment amidst the concerns raised in the readings with a more critical lens.

Mr. Wasif Rizvi, President of Habib University and the chair of the fifth and final session, lauded each of the brilliant panelists and their “ability to illuminate our paths, though remembrance is an end in itself to refining our lives and souls.”

Dr. Aqdas Afzal, Director for the Social Development and Policy program at Habib University, also praised the conference, highlighting that the selection of the speakers and topics of discussion was eclectic.

Qaima Hussain, a Comparative Humanities major from the class of 2024, shared, “the presentations of each speaker widened my understanding and a kind of universality was uncovered.”