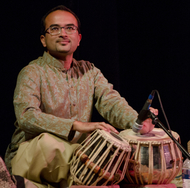 One of the few doyens of tabla that remain in Pakistan today, Ustad Khurshid Hussain hails from a family of musicians. His father, Mehboob Hussain, was a sarangi player and entrusted his friend, the great Ustad Habib Khan (also known as Baba Bibia Khan) to teach his son the art of playing tabla. Although Ustad Khurshid Hussain’s bloodline is from the Ajrada Gharana, he learned tabla primarily from Ustad Habib Khan; a repository of all gharanas’ styles and compositions. Ustad Khurshid Hussain has worked with Radio Pakistan and has performed live with some of the greatest musicians that Pakistan has witnessed including Ustad Kabir Khan, Ustad Sharif Khan Poonchwaley, Ustad Gulab Khan, Ustad Salamat Ali Khan, Ustad Fateh Ali Khan, Ustad Rais Khan, Mehdi Hassan, Iqbal Bano, Farida Khanum, and Ustad Sajid Hussain, alongside being the accompanist of choice for visiting artistes from India. Ustad Hussain is the recipient of the Pride of Performance Award 2019, by the Government of Pakistan. He has also trained the first cohort of tabla players at Habib University, alongside being an instrumental figure in furthering the aim of the Center for South Asian Music.

Ustad Khursheed Hussain is currently at Habib University training students under his tutelage.