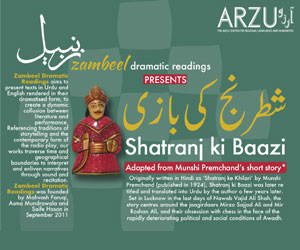 Zambeel Dramatic Readings aims to present texts in Urdu and English rendered in their dramatised form, to create a dynamic collusion between literature and performance. Referencing traditions of storytelling and the contemporary form of the radio play, our works traverse time and geographical boundaries to interpret and enliven narratives through sound and recitation. Zambeel Dramatic Readings was founded by Mahvash Faruqi, Asma Mundrawala and Saife Hasan in September 2011

Originally written in Hindi as ‘Shatranj ke Khilari’ by Munshi Premchand (published in 1924), Shatranj ki Baazi was later re titled and translated into Urdu by the author a few years later. Set in Lucknow in the last days of Nawab Vajid Ali Shah, the story centres around the jaagirdaars Mirza Sajjad Ali and Mir Roshan Ali, and their obsession with chess in the face of the rapidly deteriorating political and social conditions of Awadh.