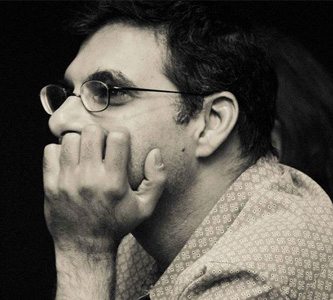 Towards a Poetics of Violence in the Plays of Edward Bond

Edward Bond, one of England’s most important post-war dramatists, once wrote, “I write about violence as naturally as Jane Austen writes about manners. Violence shapes and obsesses our society, and if we do not stop being violent we have no future.” This talk will explore how Bond stages violence in three of his early plays: Lear (1971), an adaptation of Shakespeare’s King Lear; The Sea, a re-imagining of The Tempest; and Bingo, a dramatization of the last days of Shakespeare’s life.

Dr. Minwalla is currently the Chair of the Department of Social Sciences & Liberal Arts at the Institute of Business Administration—Karachi. He has taught at numerous institutions including Yale University, Vassar College, Dartmouth College, the George Washington University, New York University, Fordham University, and SZABIST. At IBA, he teaches courses on visual culture, English writing, film and media history, and media and communications theory. His research interests include Performance Literature and History; Visual and Cultural Studies; Theater and Politics; Media and Film; and all forms of theory (linguistic, political, dramatic, visual, literary or otherwise). His essays and reviews have appeared in numerous journals and anthologies. He is currently working on two books: the first, tentatively titled Writing Theater’s Histories, is an examination of 20th century performance historiography; the second—Attachment, Displacement, Loss—investigates how visual and performance texts deploy narrative strategies to effect spectatorial identification. Dr. Minwalla was awarded a B.A. (1987) by the University of Michigan—Ann Arbor, and an M.F.A. (1991) and a D.F.A. (2000) both by the Yale School of Drama.