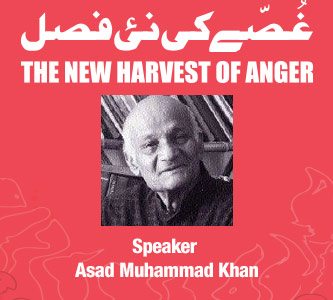 ASAD MUHAMMAD KHAN is one of the leading writers of Pakistan today. He is well-known for his fiction. He gained fame for his lyric poetry in the form of “geet” many of which were set to music for television and later on for his ground-breaking short stories. He has several successful teleplays to his credit and is regarded as one of the leading TV writers of the country. Several collections of his short-stories have been published in Urdu.

His selected stories were published in English translation as “The New Harvest of Anger.” Asad Muhammad Khan was born in 1932 in Bhopal, India and he did Masters in English Literature from Karachi University.