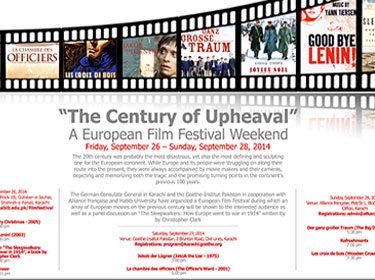 “The Century of Upheaval” A European Film Festival Weekend

The 20th century was probably the most disastrous, yet also the most defining and sculpting one for the European continent. While Europe and its people were struggling on along their route into the present, they were always accompanied by movie makers and their cameras, depicting and memorizing both the tragic and the promising turning points in the continent’s previous 100 years.

The German Consulate General in Karachi and the Goethe-Institut Pakistan – in cooperation with Alliance Française and Habib University – have organized a European Film Festival. An array of European movies on the previous century will be screened, as well as a panel discussion, on “The Sleepwalkers: How Europe went to war in 1914”.