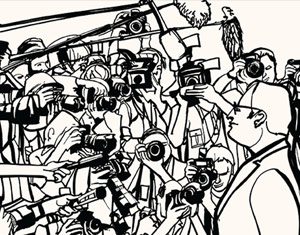 Excerpt: What are the most pressing issues in Karachi reporting today? Are these issues mainly relevant to Karachi’s residents or do some or all of them have a national or international significance? What makes Karachi worth investigating for a journalist? How do journalists reporting Karachi uncover stories about its forgotten histories, spaces and people? Who do they want to reach out to through their coverage and do they succeed?

These are some of the questions that Mohammed Hanif will discuss with a panel of acclaimed journalists reporting on diverse, critically important and sometimes surprising aspects of Karachi.

Profiles of the speakers:

Mahim Maher works on long-form features on urban issues, and is a former city editor at The Express Tribune, Karachi. Prior to that, she was the city editor for Daily Times, Karachi and worked across desks at DAWN, The Friday Times and Samaa TV. She received the Jefferson Fellowship at the East-West Centre in 2012, as well as the Daniel Pearl Fellowship by the International Centre for Journalists in 2008. Currently, she is teaching at the Institute of Communication and Media Studies at Ziauddin University.

Saher Baloch is a Staff Reporter at Dawn. Previously associated with The News International and Newsline, she has covered health, religion, human rights and minorities as beats. At present, she covers special assignments for Dawn’s back-page column, Footprints, which involves a first person account of the latest news from anywhere in Pakistan involving conflict and human rights.

Akhtar Hussain Balouch is a freelance journalist and council member of Human Rights Commission of Pakistan. He reports on the forgotten heritage and history of Pakistan in general and Karachi in particular. He has published a book on the transgenders of Pakistan, and several reports on the issues of Honour killing, Jirga System, and Lynching, and the plight of people declared as embers of so-called schedules castes. His work led to his brief disappearance in March 2003; he was released from captivity after several appeals by the Amnesty International. He has an MPhil in Urdu Literature from the University of Karachi.