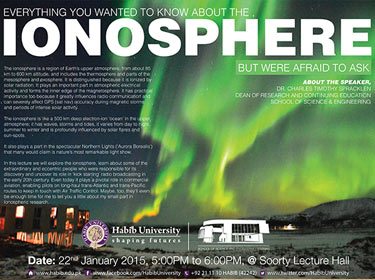 The ionosphere is like a 500 km deep electron-ion ‘ocean’ in the upper atmosphere; it has waves, storms and tides, it varies from day to night, summer to winter and is profoundly influenced by solar flares and sun-spots. It also plays a part in the spectacular Northern Lights (‘Aurora Borealis’) that many would claim is nature’s most remarkable light show.

In this lecture we will explore the ionosphere, learn about some of the extraordinary and eccentric people who were responsible for its discovery and uncover its role in ‘kick starting’ radio broadcasting in the early 20th century. Even today it plays a pivotal role in commercial aviation, enabling pilots on long-haul trans-Atlantic and trans-Pacific routes to keep in touch with Air Traffic Control. Maybe, too, they’ll even be enough time for me to tell you a little about my small part in Ionospheric research.